Meredith and Patrick Richling’s beach wedding at Sea Pines Beach Club was picture-perfect, right down to a well-placed cloud.

The Fayetteville, North Carolina, couple, who married June 6, 2015, chose Hilton Head Island for its accessibility to both sides of the family — hers from Georgia and his from North Carolina. But after 15 months of ironing out details with wedding planner Beth Baldwin, a sudden storm cloud threatened to douse their beach dreams. 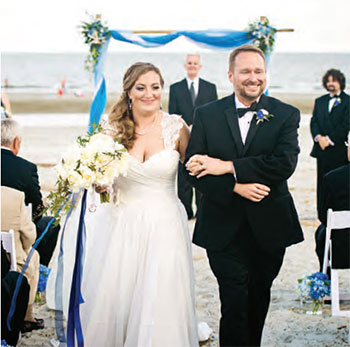 “We were watching the radar until the last minute, and it was threatening a thunderstorm,” Patrick says. “It sprinkled for a few minutes right before we all proceeded out onto the beach, but then it blew over and it was beautiful.”

The weather was not just beautiful, but helpful, Meredith adds. “The storm brought in this one big cloud that came over the sun just as my dad and I were walking down,” she says. “I had been worried about being too hot out there, so it ended up being perfect.”

“Perfect” is the way both Patrick and Meredith described every aspect of their wedding day, starting with wedding planner Baldwin.

“It was months of planning and emails and stress,” Patrick says. “But because of all that pre-planning and Beth’s hard work, it was really perfect.” 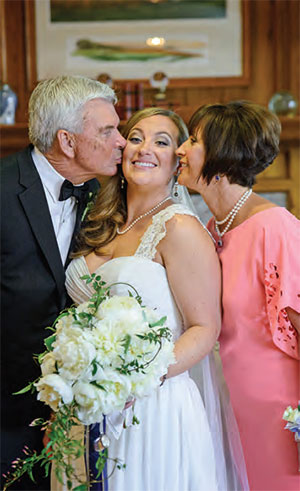 The couple had let their wedding guests know the nuptials would be “formal except for your feet,” and they weren’t kidding. Baskets of flip-flops were set up near the beach access, with a spot for guests to leave their shoes behind if they chose.

Meredith’s gown was one of flowing layers, with lace straps and a cathedral-length veil. Her bridesmaids wore bright navy luminescent taffeta dresses and carried bouquets of blue hydrangeas and roses made by A Floral Affair. Long white ribbons trailed from the bridesmaids’ bouquets, contrasting with the long blue ribbons trailing Meredith’s bouquet of peonies and hydrangeas.

As the Alyssa Jae trio played, Meredith and her father, Jack Wynn, walked toward the archway where Patrick and the rest of the attendants waited.

“I wasn’t really nervous,” says Patrick, “but seeing her come up over the dunes, and down through the aisle, that was my highlight.”

Another highlight was having his childhood pastor, the Rev. Dr. John Todd from North Carolina, perform the ceremony. “So many of my old friends were there, and friends of my parents, so it was a nice treat for them because they didn’t know Dr. Todd was going to be our officiant,” he says. 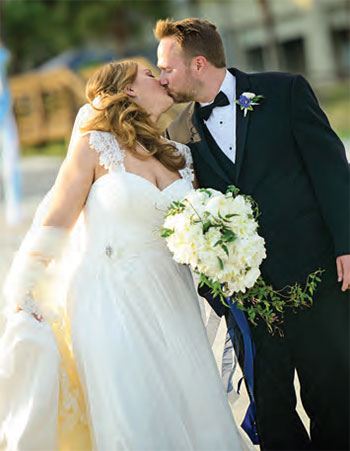 After the ceremony, guests enjoyed a cocktail hour with entertainment by classical guitarist Sean Driscoll while the newly married couple and their photographer, Lee Morris of R.L. Morris Photography, went in search of the perfect photo, which ended up being the only painful part of the day.

“We got bitten by fire ants and stepped barefoot on a patch of spurs in pursuit of the perfect wedding picture,” Meredith says. “We were standing in a dune, and fire ants were running up my leg, and the photographer kept saying, ‘You guys OK?’ And we kept saying, ‘Take the picture!’”

But pain is temporary, while a wedding photo is forever, so the couple endured, eventually returning to their loved ones at Sea Pines Beach Club, where the toasts by Meredith’s maid and matron of honor and especially her father blew everyone away.

“My dad gave an amazing speech. It was so good that people asked for it, and my mom typed it up and we’re going to have it framed” as a wedding keepsake, she says.

The couple enjoyed their first dance to “Chained and Bound” by Otis Redding before the sit-down dinner began. Patrick counts the menu as another highlight of the day.

“We had the best scallops I’ve ever eaten in my entire life,” he says of the food, which was prepared by Sea Pines Resort staff.

After dinner, dancing ensued, to the tunes of Bill West of Hilton Head Entertainment.  Later, the couple and their guests enjoyed the four-tiered wedding cake made by Frankie Cakes, featuring three flavors and adorned with cascading blue hydrangeas.

The festivities wrapped up with a special send-off by their guests, who tossed white flower petals their way as the couple made their getaway. 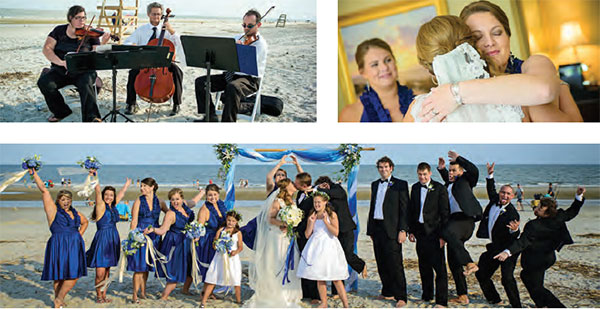 “Sea Pines has certain regulations about what you can throw; it has to be organic and biodegradable,” Meredith says. “We wanted something that would catch the light from the flash, so white flower petals worked great.”

Not just great — they were perfect, just like the rest of the day.