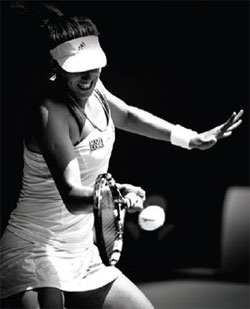 Van Der Meer Tennis has been instructing new players since 1979, raising their level of play in significant amounts. For juniors, a multitude of clinics, camps and lessons are provided; Van Der Meer will even host the South Carolina State Junior Championships in November. There are opportunities for adults as well, for they have access to similar clinics and programs.

Ranked among the top 50 tennis resorts in the entire United States by Tennis Magazine, Van Der Meer Shipyard possesses 20 courts, seven hard courts and 13 Har-Tru (green clay) cours. Despite the quality of this center, it has not hosted a professional competition since the Tennis Grand Prix in 1983. Yet, due to a cancelation, Van Deer Meer Shipyard has been granted an opportunity to host such an event once more.

The Women’s USTA Pro Circuit $10,000 Tournament will be conducted at Shipyard, kicking off the event with a qualifying round from Sept. 27 through Oct. 1, narrowing down the 64 players to 32 final contestants, who will battle for the prize money from Oct.
1 to Oct. 6. The tournament shall be held on the 13 green clay courts; of the major three types of courts, clay allows for the slowest play, although green clay is faster and harder than red.

$10,000 circuit events consist of players emerging from junior and college levels of tennis, as the first way for them to win a tournament offering prize money and, more importantly to many, Women’s Tennis Association ranking points. After competing in at least three $10,000 circuit tournaments, a player can convert her WTA points into a world ranking.

Following her success within the $10,000 circuits, the player may progress upwards and qualify for a $25,000 event, and continue advancing onwards to the ultimate goal -- a place at the four annual Grand Slam tennis tournaments, each boasting an average purse of $20 million dollars in prize money.

Many highly successful women tennis players received their professional genesis in the $10,000 circuit, including Maria Sharapova, a Russian player who obtained the No. 1 rank in the world, not once but five separate times. Sharapova also claimed first place in fourGrand Slam tournaments.

Greatness has attended Van Der Meer Shipyard’s courts before, bearing the name of Ivan Lendl, who won the title at the Shipyard-hosted 1983 Grand Prix. Lendl went on to secure a place in 19 Grand Slam finals, including eight victories. Who is to say that another legend will not be born on Hilton Head Island, during a Van Der Meer Shipyard event once more?

Jim Stubbs, Van Der Meer’s director of events for the tournament, shares similar optimism, commenting that the hosting of professional tennis at Shipyard is “like we’re going back to our roots.” He’s right, too; Shipyard hosted their first professionallevel competition only three years after they opened the center, showcasing the World Championship Tennis Grand Prix in both 1982 and 1983.

On May 27 of this year, the Van Der Meer Tennis Center also hosted a $10,000 women’s circuit, though now it’s Shipyard’s turn. In May, Yana Koroleva of Russia claimed the singles prize, while a team of two Americans, Kristy Frilling and Alexandra Mueller, seized the doubles. Koroleva, only a sophomore in college, obtained the ACC Scholar Athlete of the Year award in spring of 2013. She holds the final Nation Singles Ranking of No. 13, defeating the Nos. 6 and 5 players in the NCAA tournament, during which Koroleva advanced to the quarterfinals, becoming the fourth player in Clemson history to do so. Before she even attended college, however, she was ranked 385th in the world.

Now the spotlight turns from the Van Der Meer Tennis Center to their other facility, the acclaimed Van Der Meer Shipyard Resort. The opportunity to witness some high-quality tennis has been offered to the residents of Hilton Head Island and the surrounding areas simply because the Women’s Tennis Association was caught in a bind, thus asking the facility at Shipyard to host the tournament. Therefore, the chance to be there while rising women tennis stars battle it out for the prize of $10,000 and WTA ranking points is too good to be passed up.

Age-old tennis players, newcomers to the sport, and those who are simply sports fans alike will all find something enjoyable and exciting at the Van Der Meer Shipyard Resort from Sept. 27 to Oct. 6.