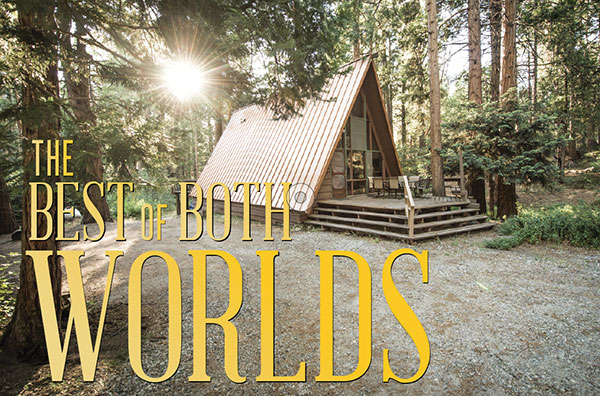 Traditionally there have been, more or less, a couple ways to camp. If you wanted to really get into nature, you could traipse into the woods with your canned rations and two-man tent on your back, and hope to find a fairly flat surface and non-poisonous leaves.
If you wanted more creature comforts, you could drive your RV or pop-up camper to a campground site with varying amounts of privacy, indoor plumbing and/or nature nearby.
But what if you want the best of both? What if you want a spectacular view and a mattress? Well then, try “glamping.”

“ ‘Glamping’ is for someone who really wants to experience the outdoors in a truly unique structure, in a comfort you’d find in a hotel,” says Cynthia Riddell, chief marketing officer at GlampingHub.com, the largest curated booking website for glamping accommodations. “You don’t have to bring all your stuff and camp ‘from scratch.’ ”
Riddell says “glamping” – or “glamorous camping” – might be a new(ish) word, but it’s not a new idea.
“The concept has been around forever; think of all the rock stars who had those outfitted Airstreams,” she says. But glamping is not just for rock stars anymore. Riddell says their clients range from age 18 to 55 but they’re mostly around the 35-year mark. While there is not necessarily a “typical glamper,” there are a few different types of adventure seekers that frequent the site.
“They’re outdoor enthusiasts, they like experiencing new things and they like treating themselves,” she says. “They tend to be really savvy and on-trend, early adopters of technology, or they’re retired or accomplished businesspeople looking for an outdoor escape.”
That “escape” can range from a rustic treehouse near a river in the North Carolina mountains for $35 per night to an exotic floating cabin in Tanzania for $1,500 per night. Most all of the sites have beds that vary in size depending on the structure. Many have kitchens so people can bring their own food to cook, though sometimes meals are provided by the site’s owners.
And how do these nature-centric glamping sites accommodate the inevitable nature call?
“A lot of our accommodations have a toilet right inside, or a separate little space right outside the main structure,” Riddell says. “For example, the safari tents are split, so you have a living area with an awesome view, and your tub and toilet in a separate space where you could also take a bath and stare out into nature.”
Not having to lug so much of your own stuff into the wilderness is what makes glamping appealing for many. Riddell says glamping is perfect for mother-daughter excursions, bridal party getaways and other adventurers who want to save time, travel light and stay somewhere special.
“People go ‘glamping’ to experience nature, and that’s what our criteria is – a truly unique structure that’s nature-based,” Riddell says.
Glamping sites range wildly in price and amenities, which means there’s a destination for every wallet. Most range from about $50 per night to $1,500 per night and, with some exceptions, you get what you pay for. For $1,500 a night it’s like you’re staying at a five-star hotel – but in a safari tent or beachside villa.
You might have a king-size bed with a lot of plush, the space is larger, there might be activities, meals are included, there could be maid service,” she says. “We’ll have accommodations that are absolutely beautiful for $20 per night, but $400 per night is the average ticket price we’re seeing today.”
Of all the different glamping site styles, which also include yurts, cabins, tipis and campervans, Riddell says the treehouse is the most popular – and GlampingHub has nearly 100 of them on its site to choose from.
“People love it,” she says of sleeping in a tree. “It’s just so unique, it almost seems like a bucket list experience.”
Though there are no glamping sites listed on Hilton Head Island (or all of South Carolina, for that matter), some who stay at the Motorcoach Resort on the south end might seem to qualify as “glampers” considering some of the RVs found there cost up to $1.5 million.
“There are a lot of $800,000 coaches in here,” says Tracy Conner, a “workamper” from Texas who is living and working at the resort for a year with her husband.  Both camping resorts on the island – the Motorcoach Resort and Hilton Head Harbor RV Resort on the north end – offer a pseudo-glamping experience in that you can stay in your tricked-out RV yet be steps away from the natural beauty of the island.
But you won’t find any safari tents, tipis, yurts or treehouses around here.