Bluffton firefighter David Adams set state records in high school and tore up the track in college. Nearly a decade later, he’s lacing up for more.

If you look in the state high school record books for the fastest 5K cross-country runner, you’ll see David Adams’ name next to a blistering 14:37.
“I broke a state record that stood for 11 years before I broke it,” he said. When you consider that his record has now stood for 15 years, you realize what an impressive runner Adams was back in the day. In fact, he nearly beat the state record in the 2-mile but missed it by a single second. The record holder for that was the same guy he beat for the 5K record. 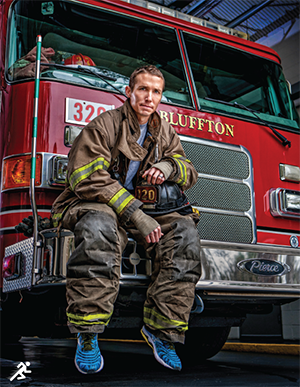 “It’s funny looking back at those races, how nervous I was. I still get that way a little, to be honest,” said Adams.
This high school phenom took his talents to Clemson University after graduation, hitting a 25-minute 8K and a sub-five-minute 5-mile run. “That first year I did very well; I was actually the best runner on the team my freshman year.”
All the state records, all the promise of those early years came to a skidding halt his sophomore year with a debilitating injury to his Achilles tendon. Just as Achilles’ heel wound up being his undoing, Adams’ Achilles tendon injury seemingly ended his dreams of running.
“After that I partook in everything else college had to offer,” Adams said with a laugh. “I got back into it my junior year, but trying to live the college dream and being a Division 1 athlete just didn’t mix.”
Adams parted ways with Clemson, moving to the Lowcountry where he spent a few years in food and beverage before joining the Bluffton Township Fire District in 2008. And in the intervening years between the injury and 2012, he barely ran.
“I ran here and there, probably five to six times a year, to relieve stress or whatever, but it was almost a full decade,” Adams said. “I realized how bad it hurt when you’re out of shape.”
It wasn’t until a fellow firefighter, Enrique Baez, put the pressure on that Adams decided the time had come to lace up again. “He harassed me about it for a long time,” Adams said. “We’d be running together and I’d be talking and he couldn’t talk back. It was very frustrating for him.”

With the encouragement of friends, Adams slowly began working up his pace that year. That’s not to say it was easy. “It comes more naturally to me than most, but it’s definitely a lot harder. When you’re younger you can go run, then pick up some basketball and go to the skate park and you just don’t get sore,” he said. “That’s definitely not the case now.”
And it’s not just extra effort. At the age of 32, he has to sacrifice to practice that he didn’t have to worry about when he was in high school. That includes giving up time with his wife, Meghan, and his two young sons Lawson and Charlie.
But they stand behind him as he makes his return to form. It’s their support that has helped him once again start putting his name in the record books, logging a headline-grabbing 4:27 at the Savannah mile run during the recent Rock ‘n’ Roll Marathon (the fastest time at the actual Savannah mile run, held in May, was 4:46, by the way, and it was set by a runner in the 20 to 24 age group).
“I’m fine with getting back to my normal stride,” he said. “It’s harder than it used to be, but I appreciate it now more than I did.”