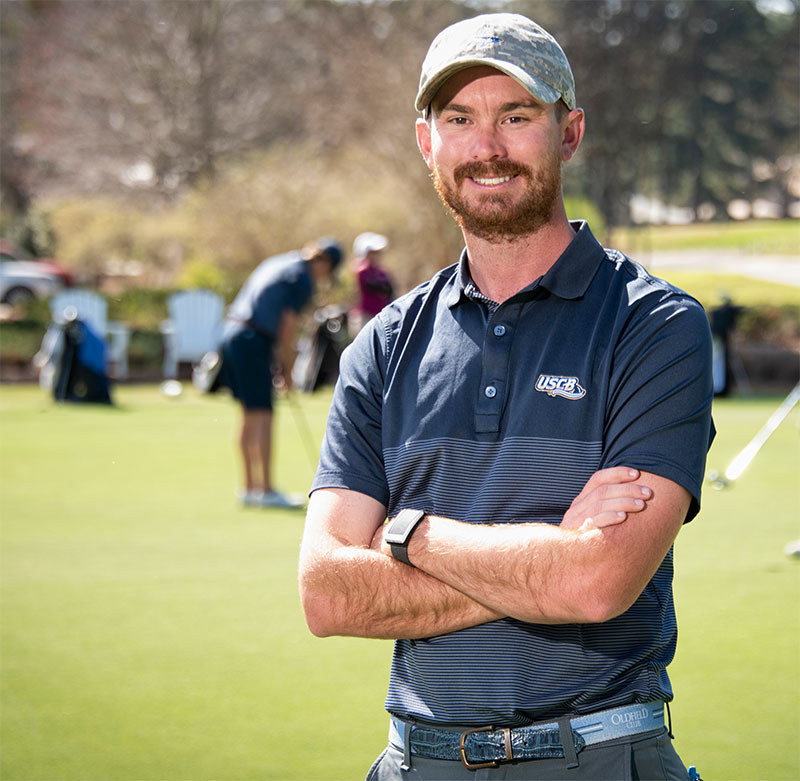 When his collegiate golf career was over and Cory Cottrell began his graduate studies in sport psychology, he constantly found himself wishing he’d had the knowledge he was gaining while he was still playing competitively.

Now he’s committed to ensuring the golfers following in his footsteps are better prepared.

Cottrell is in his first full season as the head coach of the men’s and women’s golf teams at the University of South Carolina Beaufort, where he competed for the Sand Sharks from 2012-16. He earned his master’s degree in kinesiology with an emphasis in sport and exercise psychology from Georgia Southern and entered the coaching realm.

“It was almost an everyday thing when I was learning more about it and being like, ‘Oh, that would have been pretty helpful to know when I was a player,’ ” Cottrell says with a laugh.

Cottrell took a circuitous path to the Lowcountry — and to a career in golf. He grew up just north of San Diego as an avid baseball player, but when his golf talent emerged, he saw a clearer path to a college scholarship on the links than the diamond and began to transition his focus.

By then the family had moved to Mesa, Arizona, which was fertile ground for a young golfer determined to earn a college scholarship. Cottrell found what he was looking for on the opposite side of the country, and once he got to USCB, he didn’t care to get too far away.

“I tell people all the time that once you get in the area, it’s just hard to go,” Cottrell says. “There is something about the area down here, and especially for golfers, that it’s second to none really anywhere in the world, and especially in the U.S.”

He strayed as far as Statesboro for grad school, but his next stop was as a mental-performance coach at the International Junior Golf Academy in Bluffton, and when the opportunity arose to return to USCB as an assistant coach, Cottrell couldn’t pass it up.

“Absolutely jumped on that,” Cottrell said. “It took me a little bit of being out of college golf to realize I really liked college golf.”

He rejoined the Sand Sharks during the 2020 spring season and took over as interim coach the next year. After leading USCB’s men to a tournament win and nine top-five finishes, as well as a topfive ranking and an NAIA National Championship appearance, and coaching the women to four top-fives, Cottrell dropped the interim tag and took over the program where he got his start.

His first full season is off to a roaring start, as the Sand Shark men rank second in Golfstat’s most recent NAIA team rankings, and the women are inside the top 20. USCB goes toe-to-toe with some of the elite NAIA golf programs in the Sun Conference, and the Sand Sharks are well-positioned for an impending move to the NCAA Division II Peach Belt Conference.

With his experience standing in their shoes, combined with the knowledge he has gained about the mental game and how to translate it into personal growth and success on the course, Cottrell is confident he’s right where he’s supposed to be — making a difference.

“With golf, you can’t hide. It’s just you out there,” Cottrell says. “It’s a brutal game at times. And it reveals the best and worst in us, and it’s understanding it’s a journey and going from there. And with 18- to 22-year-olds, it’s the best spot for me.”