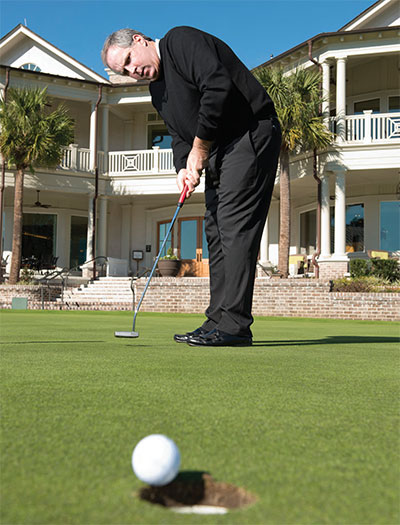 Spend time with John Farrell and you’ll quickly see that more than three decades in the Lowcountry have loosened the soil around this sharp-witted jokester’s Yankee roots.

But if the conversation turns to Sea Pines Resort, where Farrell has been employed as a golf professional since 1989, the tone turns more earnest.

A native of Pittsfield, Massachusetts, who fell in love with the game of golf at a young age, Farrell found his way to Hilton Head Island as quickly as he could and began working at Shipyard Golf Club. He landed at Sea Pines as the head pro at the Plantation Club and has worked for the resort ever since, becoming the head pro at Harbour Town Golf Links in 1991 and director of golf for the resort in 2006.

Farrell is proud of the work he and the rest of the staff in Sea Pines do every day, and never more so than during the RBC Heritage Presented by Boeing, when everyone pulls together to throw the biggest party of the year.

Farrell took a break from his Heritage preparations to reflect on his career, the changing state of the golf industry, and the best week of the year.

On the Goodwin family, whose Riverstone Group acquired the Sea Pines Resort in 2005:
“It’s almost like lightning has struck twice in the same place. [Great golf] was Charles Fraser’s vision first, which looking back on it almost seems divinely inspired, and then to have it strike again with owners who love and respect the game so much. They think you should take your hat off and stick your hand out when you complete a game. They’re traditionalists.”

On how the golf industry has changed during his career:
“It used to be the demand almost exceeded the supply with regard to rounds. It’s a very competitive market now and people have a lot more options for how to spend their discretionary money. What’s really cool for us is we have owners who have gone the opposite direction from a lot of our competitors. Instead of cutting costs, we’ve tried to add elements that no one else has, and that’s what sets us apart. We have fewer rounds played than in the ’80s but we’re after quality not quantity, and that shows up in pace of play, divots, course conditions.”

On the biggest professional challenge he faces:
“We’re always looking for talent. There are a lot of different touchpoints at the resort — we call it ‘from the gate to the grave.’ You touch a lot of different people from the moment you go through that gate. Assembling a team of like-minded people who have servants’ hearts is probably the greatest challenge, but it’s also the greatest joy when it starts clicking.”

On his professional goals:
“We try to give a private club golf experience at a semi-private resort. We’re trying to make everyone feel like it’s a bucket-list day. It’s not just another day for me. I’ve got to realize everyone who walks through that door has on an outfit they picked out six months ago. The minute you lose sight of that moment, you’re backing up, and that’s not fair to the guests.”

On his role during Heritage week:
“A big part of my report card is the success of retail sales operation. I also have my hand in guest relations, which for us is internal and external marketing. I make sure the players, sponsors, and support staff have what they need. During tournament week, if I’m scrambling, I didn’t prepare properly.”

On how special Harbour Town is:
“We’re a unique ballpark. We’re kind of a Wrigley Field or a Fenway Park. The intimacy of this venue is pretty well-documented. When we announced the plans for a major renovation, even though it had everything to do with improving course conditions and really nothing to do with changing the shot values or the personality of the course, the PGA Tour players came and said, ‘Please don’t change the Mona Lisa.’ It’s more about brains than brawn. They love it, and I love that they love it.”

On his favorite part of the Heritage:
“A month before the tournament, you drive around and people are painting their decks and putting out fresh flowers, getting ready for the tournament. It’s a sacred time. There are reunions that happen every year. People would sooner miss Christmas than they’d miss Heritage around here.”

On something not many people know about him:
“I love to cook. I grew up as one of nine children, so the more the merrier. I just like having a lot of people around. I’m not saying I’m particularly good at it, but I enjoy it.”