But for the students themselves, there is nothing ordinary about it.

It was Sera Tadokoro’s grandfather who encouraged her to apply to the academy after they read about it in Japan. He would be somewhat nearby at the automotive supply company he was starting in North Carolina.

“I was scared,” said Sera. She was only 14 when she arrived in the Lowcountry four years ago from Osaka, Japan. “I didn’t know anyone and didn’t speak much English. But when I visited, the people at the academy were really nice and I liked the practice area.” 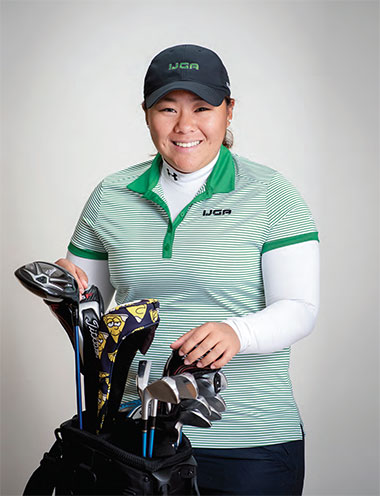 Erin Elliott, director of student life at IJGA, was not surprised by Sera’s progress.

“When she came here, she could say ‘yes,’ ‘no’ and ‘my name is Sera.’ But she had a maturity about her,” Elliott said. “I wouldn’t hesitate to have her speak in front of any group.”

And she did. Sera recently spoke before the entire school.

On the course, Sera was in her element.

“My whole family plays golf,” she said. “I used to play softball, but softball is more about team work. Golf is individual, but I can still play with my friends.

“I like my long game,” Sera said. “I’m pretty good with my driver.”

“It’s more free than my old school. We didn’t have TVs and we couldn’t use phones or computers. Our only free time was on Saturday nights.”

Sera has decided to attend the University of Kansas in the fall and plans to study business administration.

“If I don’t make it as a professional golfer, I want to start a business related to golf. In Japan, they don’t speak English. If I open my own business, I can use my English-speaking skill in Japan,” Sera said.

Learning English is essential for IJGA graduates who want to attend college in the United States, Elliott said. She said Sera will do especially well at the University of Kansas because of its strong ESL program.

Sera said she returns to Japan twice a year and misses her family.

But the best part of this area, she said, “is the weather and the seafood.”

Her advice to young students considering such a big move? “Don’t be afraid. Everyone is nice. If they don’t understand, they’ll help you.”