Hanna Kiefer came to Hilton Head Island from Germany two years ago with three goals in mind. She wanted to improve her English, her golf game and win a scholarship.

Thanks to some hard work at Hilton Head Prep, where she’s a senior, and at the Junior Players Golf Academy, she quickly achieved two of those goals in her first year.

This year, she achieved goal No. 3 — earning a scholarship to play golf at Stetson University in Florida. 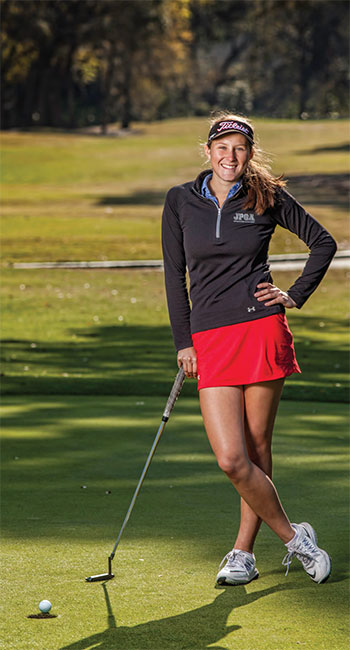 Kiefer began playing golf at 4 years old. It was only natural: Her mother played on the women’s German national team and now competes on the senior national team. Mother and daughter sometimes played against each other in Germany, where many tournaments are open to all age groups. They’ll do the same when Kiefer returns home for summer break.

When asked if she can beat her mom, she says yes. But then adds with a smile that she hasn’t seen her play lately, so she’s not quite sure.

Kiefer says though that her game has definitely improved under the direction of her JPGA coach Adam Rushin.

“My scoring is more consistent in the 70s,” she says. “Before I came here, it was like sometimes in the 70s, and that was really, really good.”

She admits to not taking practice very seriously when she first arrived on Hilton Head. So Rushin took her aside.

“I talk to Adam a lot, and he told me if I want to get better, I have to set my goals for practice.”

Rushin says such lack of discipline is common in teenage golfers, but Kiefer took his advice to heart and began to see immediate results.

She won six out of 11 events she played on the 2016 Hurricane Junior Golf Tour. Her highest score of the season was a 71. She was named the tour’s Player of the Year in the Girls 14-18 Division.

“She’s very, very athletic,” he says. “… It’s always a little bit easier when they’re that athletic to change their golf swing and make them a better player.”

He taught her to practice with a purpose. After that, he just turned her loose on the course.

“I just know it’s a tournament, and I want to win the tournament,” she says. 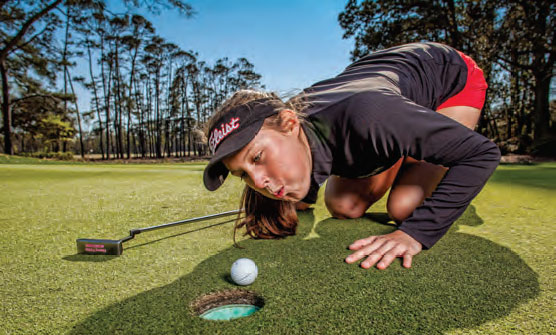 Kiefer will graduate in May, and her mom and godmother plan to come for the ceremony. She’ll return home to Kronberg, then she will compete in tournaments most weekends in Germany until she arrives at Stetson in August.

As to whether she will turn pro after college, Rushin says she has that ability if she chooses to, but it’s a hard life.

“I can see myself on the Tour,” she says, “and then on

the other hand, I can’t. There’s so much traveling around, jumping from one hotel to the next hotel.”

So for now, her goals are to do well academically at Stetson and help her new team win.

Rushin has no doubt she’ll achieve those goals, just as she did when she moved to Hilton Head.

“She’s a normal German, very emotional,” he says, “but it drives her to success.”