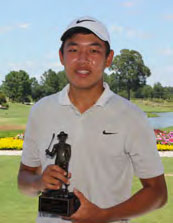 Beijing, China, native Cheng Jin is the 2016 Players Amateur Champion. He joins an impressive list of past champions including Rickie Fowler and Bill Haas. The incoming University of Southern California freshman started the final round in the lead but bogied the first three holes, giving several others a chance at the win. “I had an awful start.

I just tried to calm myself down and stick to my game,” Jin told reporters. He lost the lead to University of Alabama’s Davis Riley after Riley birdied number 9 and for the next several holes, the lead changed several times with Patrick Martin, Travis Smyth and Harrison Endycott all seeing their names at the top of the leaderboard.

18-year-old Jin regained the lead after he birdied the 16th hole and went to 12 under. His next birdie on number 17 secured his win. Australian National Team member Endycott shot six under for the day and ended the tournament tied for second place at 11 under with Vanderbilt’s Patrick Martin. Jin’s win earns him an exemption into the 2017 RBC Heritage Presented by Boeing, to be held April 10-16 at the famed Harbour Town Golf Links on Hilton Head Island.