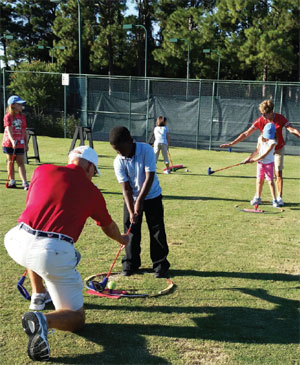 Golf needs an influx of new participants who could provide positive forward momentum for the sport. Children need a safe and welcoming environment to play, exposure to positive social and life skills and time spent exercising outside instead of playing online inside.

While it seems like a perfect match of needs and benefits, for a number of reasons golf and juniors haven’t connected the way one might think they should. Chief among those reasons has been a lack of exposure and affordable access to the game for middleclass and less-advantaged children, who have tended to flock more to traditional team sports such as football and soccer that are easier to play and pay for.

It’s an issue that is even prevalent here in Beaufort County, despite its golf-rich history and population of world-class golf courses. Yet a national program geared toward alleviating golf’s exposure problem among young kids has taken up shop in the region, providing hope that thousands of Beaufort and Jasper county kids will become involved in a game that delivers so many redeeming qualities for a generation sorely in need of them.

The First Tee of the Lowcountry recently received its official charter from the national First Tee organization, which is geared toward introducing kids to golf through educational programs. For the time being, the First Tee of the Lowcountry is operating out of both Spanish Wells Golf Club on Hilton Head Island and Eagle’s Pointe Golf Club in Bluffton, but next fall it expects to open its own facility on Hilton Head. The program has received $1 million in support toward its $1.5 million capital funding goal.

“It’s all about getting kids exposed to golf in a fun and engaging atmosphere,” said Mike Davis, director of First Tee of the Lowcountry. “First Tee has been growing all across the country from year to year, and we’re pleased to now have a charter for Beaufort and Jasper counties.”

In addition to teaching the fundamentals of the game, the First Tee program focuses on nine core values and proper eating habits, and places a signifi cant emphasis on making the right decisions both in the game and in life.

The Lowcountry program held fall classes during September and October at both Spanish Wells and Eagle’s Pointe, introducing kids to the game, its rules and life lessons such as honesty, sportsmanship and integrity.

Currently, First Tee of the Lowcountry classes cost $65, but there are multiple scholarship opportunities available to families that can’t afford the expense.

The First Tee, which is sponsored by the top associations and companies in golf, has similar charters in almost of every corner of the country. With its Lowcountry launch, the local branch will expose thousands of kids to the sport that is such an important fabric of this region.

“We live in such a wonderful place for golf, and it’s a real shame to think that so many children in this area don’t have access to the game,” Davis said. “There is great opportunity to get more kids playing golf in this region and to expose them to the nine core values of the First Tee.”

Further amplifying that opportunity is the pending launch of the First Tee National Schools Program, which will be run by the Lowcountry organization and will operate in several elementary schools on both sides of the Broad River.

“We’re hoping that through the First Tee and the National Schools Program, we will soon be reaching 10,000 children a year,” Davis said. “Without the First Tee, many of those kids would never have been exposed to the game and the core values and life lessons it provides.”

These two Lowcountry programs will help grow golf’s influence among juniors locally and nationally, which is a critical component of what the First Tee is trying to accomplish at the grassroots level of the sport.

The timing and the opportunity couldn’t be better. According to the National Golf Foundation, there are roughly 3 million golfers under the age of 17, but there are millions more who have shown interest in the sport but are not currently active in it for one reason or another.

Moreover, another recent National Golf Foundation study suggests there is ample opportunity for golf to attract children to the game through their parents, who are looking for affordable opportunities such as the First Tee to get their kids involved in the game. A 2014 Physical Activity Council study fielded by the foundation revealed there are literally millions of parents who are supportive of their kids becoming involved with golf.

Concerns about sports-related injuries, the amount of time kids spend online instead of outside and the lack of computer-free socialization has those parents seeking new activities for their children. Golf answers every one of those concerns, but parents and children need exposure to the game and affordable opportunities to learn it, which is where the First Tee can play such a vital role.

“There’s no question that golf has lost players over the past several years,” Davis said. “But the First Tee is growing and we have the opportunity to bring new players to a game that will teach them so many valuable lessons about the right way to live their lives.”

Given that promise and potential, it’s safe to say that the recently chartered First Tee of the Lowcountry is a win-win-win opportunity for kids, parents and a golf industry starved for an influx of new players.

For more information on the First Tee or to donate your time or money to the organization, email Mike Davis at hhidavis@aol.com.