Chris Cuneo has been around the University of South Carolina Beaufort golf programs long enough to see the ups and downs, though, to be fair, the downs hardly qualify as such.

Cuneo coached the USCB women for two seasons before taking over the men's program in 2010 and has led both to top 10 finishes in the NAIA National Championships, so he understands why last season, when his men's team was ranked 13th in the NAIA after the Sun Conference tournament but missed a bid to nationals by one spot in the rankings, are viewed as a disappointment.

"The hard part for me was keeping up that high level of expectations that began so early," Cuneo said, crediting former director of golf Shane LeBaron for building the program's foundation. "I'm really optimistic about getting back to nationals this year."

USCB has only fielded golf teams for a few years — the men made their debut in the 2007-08 season and the women followed a year later — but the Sand Sharks already have established themselves among the premier NAIA programs in the nation. Both the men's and women's teams have been ranked in the NAIA Top 25 in 37 consecutive polls dating to the start of the 2008-09 season, the women's program's inaugural campaign.

But the best might be just around the bend.

For the first time in three years, both USCB golf programs are ranked in the top 10 in the nation — the women were ranked eighth and the men ninth in the first coaches poll of the spring season — and both have lofty goals.

Bennett's team claimed back-to-back tournament titles to end the fall season and cruised to a 37-shot win in a five-team meet at Old South in March, all with three freshmen in the five-player starting lineup.

It's only natural that USCB would have immediate and consistent success on the links. After all, the Lowcountry is held in high esteem within the golf world, and the location, climate and reputation for top-level golf courses give the Sand Sharks an edge in recruiting. 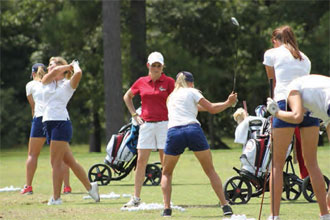 "We play in a quality conference and good players want to play against the best and on the best courses," said Cuneo, who led the women to a seventh-place finish at nationals in 2010 and coached the men to a third-place showing in 2011. "We're able to recruit good players to this area, and it keeps us competitive."

Bennett has had success stocking her roster with international players — her three freshmen are from England, Germany and Sweden — and she expects to see even better returns with future recruiting classes as her program continues to rack up accolades.

USCB's women recently played in the Kiawah Island Spring Classic, a 40-team event featuring 38 NCAA Division I programs and two NAIA teams — the Sand Sharks and Sun Conference rival SCAD Savannah. Both NAIA teams finished in the top half of the field after two rounds to advance to the top flight.

"The recognition that comes with being ranked in the top 10 and playing in those events with other schools those girls are looking at is huge," Bennett said. "They see us as a lateral move rather than a step down."

While Bennett is excited to think about what the future holds, though, she also is eager to see how high this year's team can climb. The team had to re-establish new goals after the fall season because it achieved all of the initial set.

Now the Sand Sharks are set on bettering the program's best-ever finish at nationals, the seventh place showing when Cuneo was at the helm in 2010, and they'll have the advantage of playing close to home with this year's NAIA Women's Golf National Championships at Savannah Quarters Country Club in Pooler, Ga.

"But we're still gunning for No. 1," Bennett said. "I don't think it's out of the question by any means. We haven't really put four scores together in any one round yet."