Alex Vitto was born on Hilton Head Island. Raised here. Rooted here. He did all the things a privileged kid growing up at the beach should do — he fished, he surfed, he worked food service.

But it wasn’t until Vitto left for another island — an archipelago, to be exact — that he found himself and the life he wanted to lead when he came back home.

“I moved out to Hawaii for about two years, and my wife’s family owns a surf school on the north shore of Oahu,” Vitto recalls. “I got immersed in the Hawaiian culture.”

During his time in the other ocean, Vitto’s life revolved around the sea and the tight-knit culture of Hawaii — you know, Ohana means family.

His love for surfing, formed on the oftendisappointing waves off Hilton Head, flourished in a new environment, as did his passion for seafood.

Vitto and his wife, Tori, joked about opening a poké bowl restaurant on Hilton Head. Could you imagine?

Nearly a decade later, they did.

After returning to Hilton Head, Vitto went back to his roots and worked food service, then tried selling timeshares for a period, then back to the kitchen. In 2018, he saw a space available in Circle Center and made his pitch to the leasing agent, who apparently was ready for a big ol’ bite of poké. 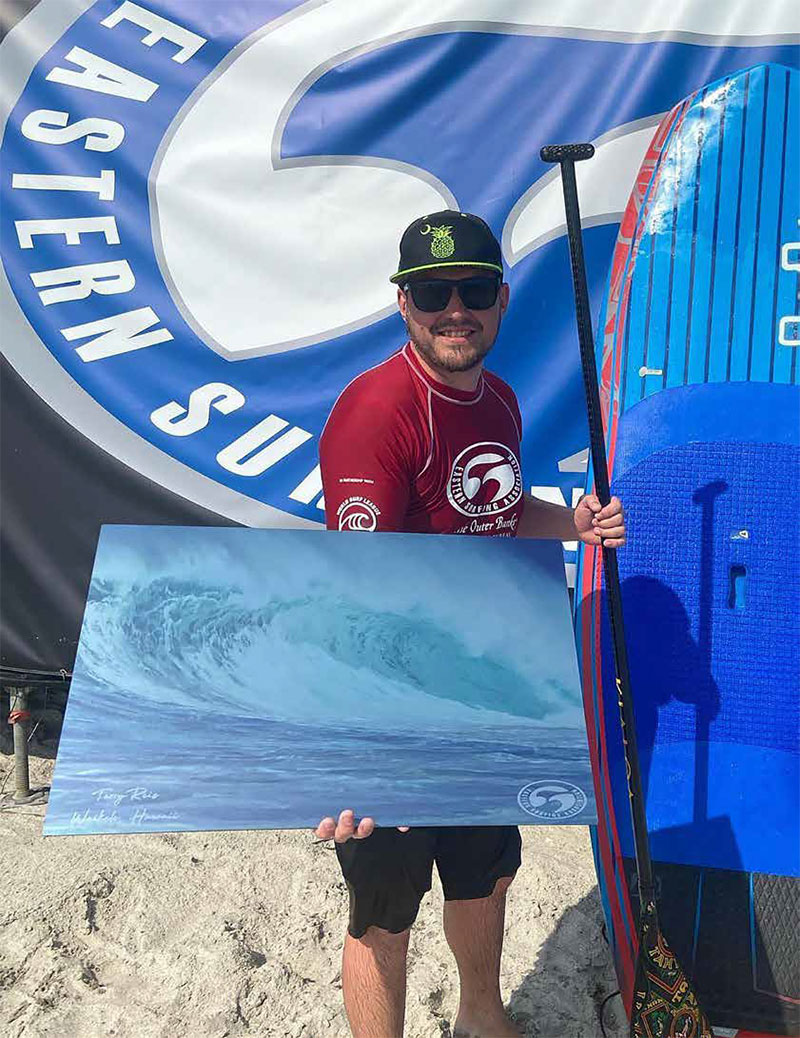 But it wasn’t just the culinary traditions Vitto picked up on the (other) islands. He also honed his skills on a surfboard as a result of his time working at the Sunset Suratt Surf Academy under local surfing guru Bryan Suratt.

“I was lucky enough to be accepted into that family and let them kind of bring me into the surf school,” Vitto says. “I got to help with lessons for kids and tourists where you had to paddle out about 60 or 100 yards, and my job was to put my toe on someone else’s board and paddle them out. After two summers of that I got in the best shape of my life and that’s when I was really able to throw myself into the sport.”

Back at home, the surf left something to be desired, but Vitto reconnected with old pal J.T. Roberts, who owns Forest Beach Surf and Cycle on HHI and had been competing in the Eastern Surfing Association contests on nearby Tybee Island. Roberts invited Vitto to tag along once, and he was registered for the next competition before he left. That was almost four years ago, and he’s been competing ever since.

In September 2021, the Hilton Head duo dominated the local district and put on a show at the Southeast Regionals to qualify for the Eastern Championships, where Roberts won the men’s longboard division and Vitto placed third in the open stand-up paddleboard division.

Life got in the way this year, and Vitto didn’t make enough district events on Tybee Island to qualify for regionals or Easterns, but he plans to make a comeback next season and make another run at nationals.

“I wish I had more time to train,” Vitto says. “Running three businesses and having a family is challenging. I’m definitely not in the best shape I’ve ever been right now. But I want to get back out there. Watching my kids and family compete and be a part of this, having them get involved and seeing them enjoy it and having fun out there with our friends and family is the best.”

Combining the best of two islands he loves, Alex Vitto has found himself right here at home.