LUCKILY FOR RESIDENTS AND VISITORS OF HILTON HEAD ISLAND AND BLUFFTON, THERE’S NO SHORTAGE OF PLACES TO CATCH THE GAME.

Every football fan has been there. The big game is about to kick off when you realize it’s airing on a channel you don’t get.

“Given the trend of DirecTV giving away the packages, everybody is a sports bar nowadays,” said Darrell Neeley, owner of Callahan’s Sports Bar & Deluxe Grill on Hilton Head.

While it’s true that virtually every restaurant caters to football fans these days, college football Saturdays and NFL Sundays remain a big boon for sports bars like Callahan’s and Casey’s Sports Bar & Grille, which is just down New Orleans Road.

Many sports bars know they can count on big crowds because they cater to fans of certain teams. Cincinnati Bengals fans can always find kindred spirits at Rockfish Seafood & Steaks by Bomboras. Chicago Bears fans can bear down with fellow fans at Hinchey’s Chicago Bar & Grill locations on Hilton Head’s south end and in Bluffton, and diehard Green Bay Packers supporters like to meet up at Jump & Phil’s Bar and Grill. 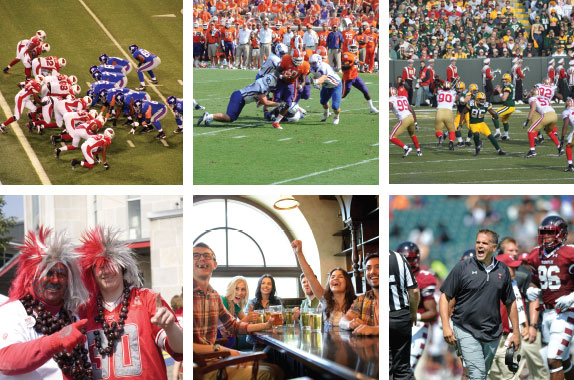 The Pittsburgh Steelers also have a large following in the Lowcountry.

“Everybody is a Steelers bar down here,” Neeley said.

Callahan’s attracts a mix of NFL fans on Sundays, but its biggest crowds come on Saturdays, when it serves as headquarters for the local West Virginia University alumni association, which boasts more than 150 members, and Southeastern Conference fans.

Hinchey’s on Hilton Head is especially hopping on Saturday night and Sunday — or any time Notre Dame, Pitt or the Bears are playing. 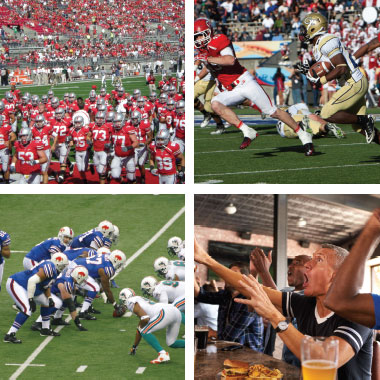 “We get good, fun crowds,” Hinchey’s co-owner Beth Phalen said. “You definitely have to get here early to get a good seat.”

The competition isn’t only fierce on the field, as every sports bar fights to find its niche and attract crowds on game day. Hickory Tavern at the Plaza at Shelter Cove on Hilton Head hopes to get fans hooked before the season even begins by offering special fantasy football draft party packages.

Leagues of eight or more can hold their draft party at the restaurant and receive a free appetizer for every four players, bottomless chips and salsa, a $10 gift certificate for each player, and a $100 gift card for the league commissioner.

Specials like the draft package are one way Lowcountry sports bars are trying to combat the fact that all-inclusive sports media packages are more accessible to average fans than ever before, thanks to the proliferation of online streaming services. NFL games, in particular, have become less of a draw, Neeley said, while college games are more likely to be shown on obscure channels that aren’t included in most cable packages.

Even when the games are on at home, though, it’s always more exciting to watch with a crowd of like-minded fans — and maybe even a few who are cheering for the other side.

“We get them all,” Neeley said. “Back 10 years ago, if you walked in here in a Cleveland Browns jersey you might be in trouble, but not anymore. We try to cater to everybody.”

Still, only the brave would root for the other team at some of the area’s more die-hard Steelers hangouts, said Erica Schoch, manager at Giuseppi’s Pizza & Pasta in Bluffton, where “anything Pittsburgh” draws a crowd.