The Wall is for legends. On a small island, with far fewer prospects to draw from than powerhouse schools across the Southeast and nation with feeder programs drawing kids in, head coach Mike Newton is the latest to carry on Hilton Head Island High School wrestling’s expectation for excellence.

Alex Braden and Billy Christie entered the training room as freshmen, staring at The Wall, dreaming of one day earning a place on the listing of school records and state champions. 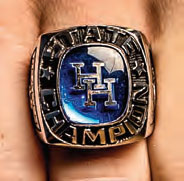 Christie had greatness in his genes — his father, Bill, was a former Virginia high school state champion and wrestled at the University of North Carolina Chapel Hill. Billy began wrestling in kindergarten and immediately fell in love with the sport in Virginia before moving to Hilton Head as an eighth grader.

Braden’s passion didn’t truly spawn until middle school. He was a wiry kid with long arms and legs but very little meat on his bones and a technique closer to WWE than Greco Roman. So when the 132-pound Braden met the more muscular, more technically sound 170-pound Christie, they didn’t exactly seem like natural training partners.

“You can’t measure passion on paper, and Billy and I knew from the day we met that we had that passion to be great,” Braden said of the unlikely pairing that has led to a friendship far beyond the mat. “We came in bonded as freshmen with big dreams but we knew from day one that we both had the drive to meet those dreams.”

Three years later, the pair has earned four individual state championship titles. Braden scored titles at 132 as a freshman and 138 as a junior, while Christie has won back-to-back state titles at 170.

And both Braden and Christie say those state titles would never have happened without one pushing the other.

“Our strengths and weaknesses complement each other so well,” Christie said of his training partner. “I force him to fight with power every day because of my build, power he probably never knew he had in him. And I force him to beat me with technique or get pinned quickly. We both love the camaraderie of this team, but we both love having those six minutes on the mat to ourselves to create our own destiny.”

Braden laughed when forced to describe his style and what he brings to the table for Christie.

“I’m funky, I wrestle funky,” Braden said. “I get him in positions he’s not used to being in because I’m not, shall we say, classically trained. I made him faster on his feet because he has to work to corner me.”

“I call him Noodles, because he’s just so dang slippery,” Christie said. “But to have that kind of practice, that kind of work ethic every day, it prepares us so well for the matches.”

Both credit Newton with creating a schedule that consistently pushes them, including the creation of the Coastal Clash tournament at Hilton Head High, which draws top-notch schools from across the Northeast.

“Some schools put 20 to 30 matches on a schedule each year. Coach Newton, he gets us 50 to 55 matches,” Christie said. “That’s a tough schedule, but it makes us prepare each and every day, makes us constantly aware of what we’re putting in our bodies and focuses us on nutrition and training.”

The pair takes that training to the next level. Both have foregone other sporting passions to focus solely on wrestling and the pursuit of mat excellence. Braden said that after getting a bit big-headed with his unexpected freshman title, the second-place finish as a sophomore was a wakeup call to what he needs to do to compete at a higher level.

“Billy has shown me what that next level is. He picked me up after that loss and just got me training harder than ever. I’m so grateful to him for that,” Braden said. “His dedication, it’s pushed me and shown me that I have bigger things inside me, so much more to achieve.”

And while some may look at this as the offseason, Braden and Christie are keeping a rigorous schedule of training and sanctioned tournaments on the weekends throughout the spring and summer, including the recently completed spring nationals in Virginia Beach.

Christie will head north soon, making his annual trek to his family’s summer home on Cape Cod. There, he will compete in tourneys throughout the Northeast, a hotbed for technically elite wrestling talent.

Braden will travel this summer as well, wrestling with the Michigan Bad Boyz elite squad before heading up to Massachusetts to train with Christie for a couple weeks and join Christie’s training at The Dungeon, a wrestling gym famous for spawning national champions.

“We’ll also train with my dad, who puts us through some of the most rigorous routines either of us have ever faced, so there’s no down time,” Christie said. “We both have big plans for senior year and beyond.”

Braden will look to make the jump to 145 pounds to win a third state title, while Christie will look for a three-peat at 170. Both are pushing teammates to thrive for a region, Lower State and state team title. And a spring break visit from Talon Seitz, Seahawks legend and current wrestler at nation powerhouse Nebraska-Kearney, have them chasing an undefeated season.

“He posted a 54-0 mark and he’s busting on us that we can’t do that,” Christie said of seeing Seitz. Plus, the collegian was doing a little recruiting during his visit home.

“He has us both pegged for spots at Nebraska-Kearney, but we both told him we are only thinking of senior year right now,” Braden said.

They have both accomplished so much already, both made their mark on The Wall. But both are within legendary records. Christie is 49 wins away from setting the Seahawks’ record for career victories, while Braden is 30-plus pins away from breaking the career pins mark at Hilton Head High.

“It’s a big year ahead,” Christie said. “I feel very grateful to be sharing all this with someone like Alex. It’s been a friendship and a friendly rivalry that I know I’ll treasure forever.”