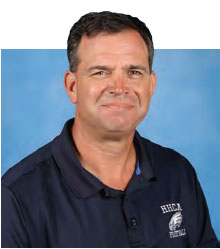 Peduzzi takes over for Matt Smith, who went 3-14 the past two seasons.