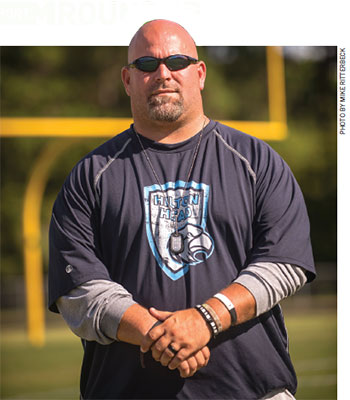 The Carolina Panthers have nominated Hilton Head Island High School’s BJ Payne as the team’s nominee for the 2016 Don Shula NFL High School Coach of the Year Award. The annual award honors a high school football coach who displays the integrity, achievement and leadership exemplified by Shula, who concluded his 36-year NFL coaching career as the league’s all-time winningest coach.

. He has compiled a career mark of 34-22 while taking the Seahawks to five straight playoff appearances. During his tenure, he has increased student-athlete participation in the football program while establishing a dozen new team statistical records. His guidance and motivation has led to new levels of success in the football team’s classroom performance through academic support programs.

Payne provides similar leadership for the Hilton head community. Through his efforts, the Seahawk players are engaged throughout Hilton Head’s youth football organizations, while Payne offers annual youth football coaching clinics and summer football camps. He also leads an annual effort to raise money for breast cancer research. Recently, Payne was a galvanizing community leader in the wake of Hurricane Matthew and helped lead efforts that re-established homes for 50 island families, as well as coordinated a donation relief campaign.

“The Carolina Panthers are pleased to nominate BJ Payne for the Don Shula NFL High School Coach of the Year Award,” said Riley Fields, the Panthers’ director of community relations. “Coach Payne is a strong model of how a football coach can dynamically impact his school and community. His exemplary leadership is a benefit to both his student-athletes and our region.”

The 2016 Don Shula NFL High School Coach of the Year Award winner will be recognized in Houston during the NFL Honors program, a two-hour primetime awards special to air nationally on Feb. 4, the night before Super Bowl LI. The winner will receive $25,000 from the NFL Foundation, which includes a $10,000 donation to his or her high school football program. Eligible nominees are active or retired high school football coaches nominated by NFL teams or players.