During his rookie season, Dan Driessen’s lethal batting skills earned him the nickname “The Cobra.” A two-time World Series winner in 1975 and 1976, Driessen played with the Cincinnati Reds, Montreal Expos, San Francisco Giants, Houston Astros and St. Louis Cardinals, retiring in October 1987 after a remarkable 15-year baseball career, one much longer than most professional players can claim. But it all started on Hilton Head Island.

“I was born on Hilton Head Island before they had the bridges. So back then, people would get to the other side in boats. Somebody let the secret out and everybody's here now,” he says, half in jest. When he left the island to pursue his dream of playing baseball, he did it with Pete Rose, Joe Morgan, Johnny Bench, George Foster and others — all players for the legendary Cincinnati Reds, nicknamed the “Big Red Machine” in the 1970s.

“There was a semi-pro team on the island called the Blue Jays, and I would watch the older guys play. My brother, who also wanted to be a baseball player, wanted me to catch and I was leery, but I went behind the plate and got four or five hits that day,” Driessen says. He has been in the lineup ever since. “One year, I played with the Hardeeville Bo Weevils and the team's manager wrote all the major league teams about tryouts. The Atlanta Braves responded and held tryouts with over 300 people in Greenwood. William Lucas, the first African-American manager within Major League Baseball, was the front-office boss of the Atlanta Braves at the time. Every time Bill Lucas called on me, I had a hit but he could not decide to keep me or not. So they asked me to spend the night. They didn’t sign me, but by the time I got back to Hilton Head the Cincinnati Reds invited my brother and me to try out with them. They signed me.”

Driessen then went to Tampa, but didn't make any money as a free agent the first year. “They had this high-dollar free agent in front of me. The next year they released the guy and it was my job to play. I missed the batting title by a point,” he says.

Driessen then went to Three Rivers, Canada, where the Cincinnati Reds had a farm team.

“As we got off the plane, I was trying to figure out what this white stuff was on the ground — it was early April. I had never played in real cold weather before, so it took me a while to get going,” he says. “I hit .327 that year and from there I went to Triple A. In 1973, I got off to a good start and I was hitting .406 in June. The Reds were playing in Chicago, and I was so nervous I couldn't keep my knees from knocking. Eventually I settled down and got a hit. In fact, that year I finished hitting .301. In my career, I played in three World Series — we won in 1975 and 1976. In '75, we beat the Boston Red Sox. In '76, we beat the Yankees in four games straight. I think I hit .357. From there, I played in another World Series with the St. Louis Cardinals. We won all our home games and they won all their home games.”

The Cobra’s career in baseball has left him with some great stories: “One year, we went down to Puerto Rico to play what we called ‘winter ball’. On a day we were off, my wife, who was my girlfriend at the time, and I were babysitting for Ken Griffey Jr. and his brother Craig. We noticed Ken was missing for a minute and we looked all around until we finally found him — he had his left arm stuck in one of the ringers of the washing machine. Luckily, he didn't really hurt himself.”

And luckily, it didn’t do any lasting damage. Griffey later became a first-round draft pick and had an iconic baseball career. 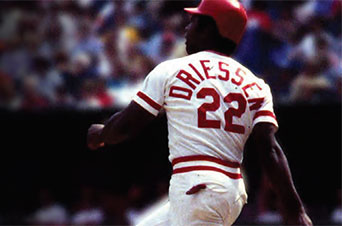 But that’s only one of the many baseball tales Driessen could tell. “We went to the playoffs against the Mets,” he recalls. “Pete Rose went into the clubhouse They had to stop the game — fans in New York are rough. They were throwing bottles and bricks on the field and everything else. Some of the Mets players calmed them down.” And then there’s this story from the clubhouse: “Pete Rose had a son called Pete, and those little guys were playing baseball inside the clubhouse — we thought they were going to injure our players, they were hitting the balls so hard. Sparky Anderson had them quit.”

These days, Driessen keeps busy with family and work and being back home, nested in a scenic spot near where he was born and raised. There are two native islander cemeteries on his property — a nearby church takes care of them but he is happy to share the history of the cemeteries with students and preservation organizations. “Most of the people who are buried here are related to me or I know their families,” he says. “They're right here from Hilton Head.”