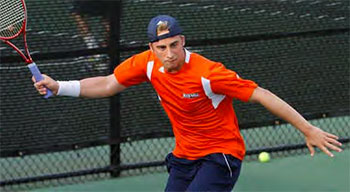 Upon graduating from Bucknell University, 2012 Hilton Head Christian Academy graduate Nick Bybel will also be the recipient and male winner of the Christy Mathewson Award, presented annually to the outstanding athlete in the senior class. Bybel was also recently named to the All-Patriot League First Team for the fourth straight year, the first Bucknell player so honored in the 26-year history of the league. His only loss in league play this year came against Navy in a match in which he retired because of an injury.

Bybel's overall record this year was 28-6 and his career singles record of 112-29 is a Bucknell record for total victories. His combined singles and doubles career mark of 192-67 is also a school record. As a senior at Hilton Head Christian, Bybel was on the 2012 team that was the SCISAA state runner-up. He won the SCISAA Open championship and was named SCISAA state player of the year.