As a high school and collegiate runner, Hilton Head Islander Jack Felix rarely made it through a season without getting hurt.

Each time he suffered stress fractures or other injuries from running cross-country or track, he would have to shift gears to other training methods to stay in shape. That meant diving in the pool for thousands of laps and hopping on his bike for miles and miles of pedaling.

At the time, it was frustrating, especially when he lost his place on the University of Tennessee team after a broken ankle. But the determination to continue to compete and the injuries leading him to bike and swim seem to have been preparing him for a new sports calling — the world of draft-legal triathlon.

After only a few months of training, he’s managed to qualify to compete in professional triathlon events and has been invited this summer to an Olympic training camp in Colorado.

“I was always so furious and so disappointed in myself for not being able to perform,” he says of his injuries while a runner. “But looking back, all that cross-training helped me build a base that sets me apart.”

The transition to the new sport has followed years of achievements and setbacks. Despite having to heal from various injuries, Felix was a state champion runner on Hilton Head Island High School’s track and cross-country teams. He was recruited to run for several colleges and chose the University of Tennessee because he bonded with the coach there. But soon after he arrived on campus, the coach was fired. Then in his sophomore year, Felix broke his ankle and was removed from the team.

Rather than give up, he began contacting coaches who had recruited him in high school. Clemson took him in, and Felix says he felt right at home on the Tigers’ cross-country and track teams.

“I was running best times for the first time in two years,” he says.

After he finished his track career last May at Clemson, he decided to stop running for a while and focus on cycling, another one of his passions. In October, a friend told him about USA Triathlon’s Collegiate Recruitment Program, which looks for young athletes who might have Olympic potential. So he contacted USA Triathlon, which had him perform some tests. His running and swimming times impressed the recruiter, so she hooked him up with a coach based in Atlanta in November. In March, he was off to Clermont, Florida, for his first draft-legal triathlon.

Unlike the triathlons that are more prevalent in the United States, these competitions allow cyclists to draft — that is, use other cyclists to reduce wind resistance. The draft-legal triathlon style is the prevailing international model of competition and the format used in the Olympics.

“It’s a completely different field from normal triathlon, in that it’s so much more tactical,” Felix says. “Groups will form, and groups will work together. … I like it a lot.”

His goal at Clermont — a 750-meter swim, 20-kilometer bike and 5K run event — was to finish in the top three so he could qualify for an elite license, which would allow him to compete in professional events. He came in a disappointing fourth, but learned some valuable lessons and began training harder.

On April 22, he got another chance, with the National Collegiate Championships. As luck would have it, the event would be at Clemson, where he was finishing up his degree in health sciences. Having trained 15 to 20 hours a week, with the help of his coach who would keep up with his progress remotely, he achieved his goal. He came in third place with a time of 53:45:13 — four minutes faster than at Clermont. That qualified him for the elite license, which often takes years to achieve.

“The only guys beating him are the guys who have been doing this for so long,” says his coach, Dan Arnett. “… And here comes Jack just showing up.”

His next stop, after graduating from Clemson in May, is Iowa on July 9 for the championships for under-23-year-olds — his first international event.

Then in mid-July,he heads to Colorado to spend 10 days at the Olympic Training Center. He will join eight to 12 other athletes chosen to attend the camp and work with the resident coaches. He will also be evaluated for acceptance to USA Triathlon’s resident program, where he would undergo full-time triathlon training and racing for two years. 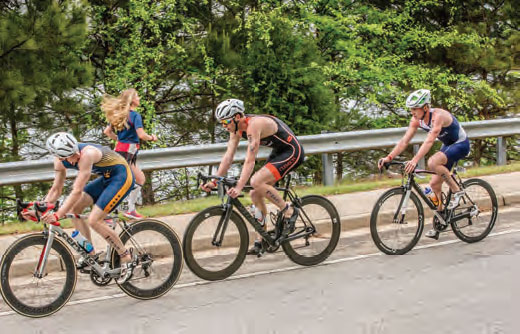 His coach believes Felix’s future in the sport is bright.

“He is one of the rare athletes,” Arnett says. “He truly has the potential at minimum to make the Olympics training squad.”

USA Triathlon collegiate recruiter and 2004 Olympic triathlete Barb Lindquist also sees great potential in Felix — impressed not only with his athletic abilities but his character.

“Jack is an amazing young man,” she says, adding that he is quick to help out his fellow athletes. “He has some of those intangible qualities that we look for in an athlete.”

Felix says he’s taking things a step at a time and enjoying the ride — on his bike, that is — and the run and the swim.