As the fall approaches, so does the promise of crisp, Lowcountry evenings under Friday night lights. For some area football teams, a new season means a new era. For others, it’s a chance to keep building from an already firm foundation.

Last season started and ended with some turbulence as Bluffton High School saw its first game go to forfeiture and Hilton Head Christian Academy said goodbye to its head coach. But local football coaches feel only excitement and hope as the first days of practice and first steps onto the field creep closer and closer. 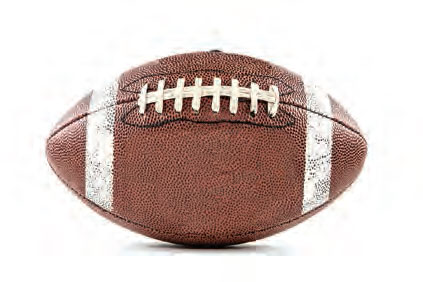 Even with hard-to-replace Frazier gone, head coach B.J. Payne and the Seahawks should be a force to be reckoned with this fall. There’s a story of redemption for the Seahawks, who missed out on the playoffs with a loss to regional rival Beaufort High School. Two weeks later, the team crushed R.B. Stall 65-0 to finish the season and give fans a taste of what’s to come.

Returning to the field this year are starting quarterback Aiden Hegarty and Jeremiah Maddox, who already has committed to Marshall University. Another player receiving college looks, John Baty, joins Maddox on defense. Baty, a 6-foot cornerback, has received a handful of offers (including one from Hilton Head High football alum Michael Julian’s team, Toledo) but has yet to commit.

Hegarty, a rising senior, is a dual threat on the field, but he didn’t have to run much in the past with Frazier at the ready. This year will be a test of his abilities, forcing him to run more than last season’s average 25.3 yards per game. If Payne finds a solid target for Hegarty, you can expect a successful season for the Seahawks.

This season is all about fresh starts for Hilton Head Christian. Primed with a new head coach, Matt Smith, and a youthful squad, the Eagles are looking to build a championship-worthy team.

“He won a couple of state titles (at Prep),” Smith says. “I think he’ll bring a good, hard-nose philosophy to our defense.”

Peduzzi and Smith have a challenge ahead of them. The Eagles are young and Smith is looking at his seniors in terms of quality — not quantity. Though there aren’t many upperclassmen, Smith thinks the ones he has will take on big enough leadership roles to keep his team afloat.

“I’ve got good senior leadership, just not a lot of them,” Smith says. “I’ve got four or five kids that can really step up and be leaders. But it’s just four or five — not 10 or 12.” 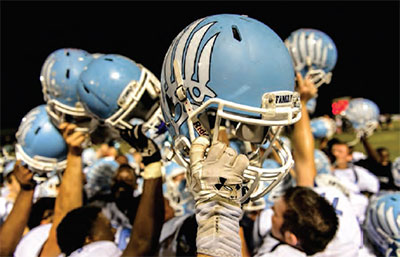 Physically, a young team could have issues. Smith says younger players haven’t yet built up a football mentality and that could wear on the team as the season continues. Still, Smith says he expects to be competitive. He’s confident in his receivers and though he hasn’t decided on a starting quarterback yet, he’s got options. He’s been working with a small group of quarterbacks all summer and hopes to make a decision well before the Hilton Head Christian squad plays its first game Aug. 21.

Above all, though, Smith is just looking forward to the opportunity to take Eagles under his wing. It’s a new era at Hilton Head Christian Academy and what the team lacks in experience, it makes up for in zeal.

“What we bring back is excitement and enthusiasm,” says Smith.

It’s the nature of high school athletics to lose players to other sports during the offseason. The Hilton Head Prep football team is no exception. With baseball season and other athletic camps dotting the summer, head coach Kevin Wald missed a chunk of his players at the team’s summer camp at Presbyterian College. Even so, Wald’s got a good grip on what his team has to offer when his veteran team returns to the field this fall.

The Hilton Head Prep Dolphins have the luxury of experience on their side. Last year’s 8-3 team reappears this season with most of its starting players. Not only that, but the team’s upperclassmen were coached by Wald through their entire high school career. This gives the players and Wald a better understanding of where the team’s strengths and weaknesses lie.

“This is my fourth year at Prep, so I know all the kids well enough,” Wald says. “I know who can do what and I have a pretty good feel for who’s capable.”

Wald says his team is especially capable on the line of scrimmage. He pointed out his offensive and defensive line as the team’s strength — and one of the places where you can find some of the team’s most talented vets. A handful of Prep’s offensive and defensive linemen started in their position freshman year. As upperclassmen, they’ve mastered the position. And the line has potential to grow with one of its key leaders, John Horner, just starting his junior year.

Using a strong corps of linemen as a backbone to his offense, Wald says his team will excel at the running game. It’s the passing game where he has some concerns. Although the team has rising junior Mac Orie, there aren’t many other wideouts on the roster.

“We need some receivers to step up,” Wald says. “We graduated virtually everybody.”

Wald is looking for players to step up in a few other places, but question marks aside, Wald is confident that his superior linebackers will be enough to bring the Dolphins victory.

“Football is won and lost on the line of scrimmage,’ Wald says. “Period. End of story.”

The 2014 season is one the Bluffton Bobcats will try to separate themselves from this upcoming year. A season that started with promise soon turned into frustration as the Bobcats forfeited their first game after allowing an ineligible player to take the field.

Things continued to go downhill for the Bobcats as they finished their season 3-9, including a loss to Hilton Head Island High in the Bridge Bowl. The Bobcats have time to prepare for a rematch against the Seahawks on Sept. 25, and the depth to rebuild.

First, head coach Kenneth Cribb will need to replace Alex Davis, a class of 2015 quarterback who threw for 1,744 yards in his senior season. The Bobcats relied heavily on Davis in 2013 and 2014, so there aren’t many options to take his space. Junior Sam Aerni is a likely replacement, though the  5-foot-11 quarterback only produced in rushing plays last year. Once a passer is found, Cribb has a target ready. Senior Terrance Heyward led the team in receiving touchdowns last season, with six touchdowns in his 456 receiving yards.

Where Bluffton need not worry is on defense. While some of the stronger defensive ends have graduated, left behind is a duo of linebackers who are poised to perform in 2014. Junior linebacker Kevin Diggs had 53 tackles last season, nine of which were solo tackles for a loss. Fellow linebacker DaeQundrea Nelson finished right behind Diggs with 47 total tackles in 2014. He returns in 2015 for his senior year.

Cheesy as it may be, the adage “Defense wins championships” will need to hold true if the Bobcats want to make it to the playoffs. Bluffton repeats its season opener against Battery Creek August 21st, so the clock is ticking for the Bobcats to find a game-ready quarterback and prepare for a comeback season. 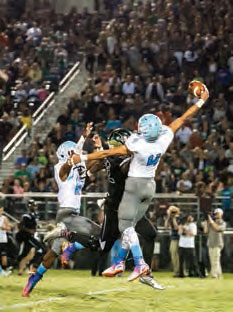