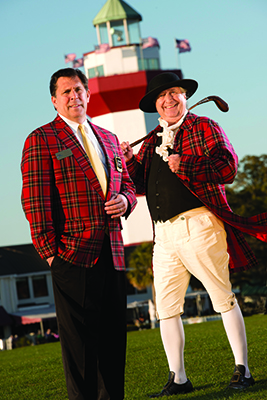 RBC Heritage tournament director Steve Wilmot wasn’t born with a 9-iron in hand. In fact, when he first arrived on Hilton Head Island, the Moorestown, N.J., native considered himself more of a football, basketball and baseball guy.  Cut to 27 years later, and he is now a walking encyclopedia of golf, and close personal friends with some of the game’s biggest names.

Sir William Innes may be the official mascot of the RBC Heritage, but Steve Wilmot is its driving force, and since taking over as tournament director in 1997, he has taken a little more than his share of the blame and a little less than his share of credit.

He has guided the tournament through dark times (the bankruptcy of WorldCom in 2003 and Verizon’s exit in 2011). He has been there through good times (the purse has more than tripled since 1997 and $23 million has been donated to local charities since his arrival).

With the 45th RBC Heritage just around the corner (April 15-21), Wilmot took a few moments to speak with Golfer’s Guide about the 2013 event and his favorite Heritage memories.

Golfer’s Guide: So the 45th RBC Heritage is now just days away. Is this an exciting time for you or a hectic time?

Steve Wilmot: Yes (laughs). Actually, it’s a wonderful time. People have no idea the time, effort and hours put in not just by myself and the staff, but from our trustees and volunteers. Collectively, it’s a team effort to get things done. That’s what I love about the job. From all areas of operation, to food and beverage, to accommodations and marketing – it all kind of comes together. It’s like Christmas. I dread Mondays after the Heritage, I’ll tell you that. It’s like the day after Christmas.

GG: You know so many of these professional golfers on a personal level. Do you find yourself rooting for certain guys during tournament week?

SW: Yeah, I have favorites. But it’s something I keep to myself. You’ll never see me filling out one of those golf pools.

GG: Along those same lines, do you find yourself rooting against any of them?

SW: I would never say against. I selfishly sometimes look at what’s best for the tournament. Nothing against anybody that wins the event — that week, they’re obviously the best player in the world. On the other side, you ask yourself, “Who would represent us well?” Do you want one of the top players in the world, or would it be nice to have an RBC guy winning? I’ll ask myself those things.

GG: I know several golfers have given you gifts and other mementos over the years. What is the best thing you’ve received?

SW: A bottle of tequila from the Gays (Brian and Kimberly). That helped me better than anything else (laughs). Actually, I have gotten several things. A few years ago John Maginnes was walking through the parking lot and said, “Wilmot, this putter isn’t working for me. You can have it.” There has been a lot of stuff like that.

GG: The international stars have always been strong supporters of the Heritage. The young American stars seem to be big fans as well. What do you attribute that to?

SW: The international players are here for Augusta. We’re in close proximity so they can drive and it’s a different atmosphere. As far as the younger stars go, this Players Amateur (July 8-14 at Berkeley Hall Club) has been good to us. You look at the past winners – Ben Curtis, Bill Haas, Camilo Villegas, Bud Cauley, Brian Harman, Rickie Fowler. Those are some pretty good names. We put on the same show out there for the amateurs like we do here for the professionals and they see that.

GG: Technology has improved dramatically over the years but the winning scores of your tournament have not dropped significantly. Why do you think that is?

SW: Hitting it farther isn’t going to help here. It’s still a shot-maker’s golf course. You just can’t grip it and rip it. Pete Dye has come in and done a few things the past few years just to take it back to where it was. That’s what the players like about it. It’s just a good old traditional golf course. There are not many of those left out there.

GG: The Heritage has such a strong list of former champions. Do you prefer established champions such as Jim Furyk or up-and-coming champions like Brandt Snedeker, who go on to great things shortly after winning your tournament?

SW: It kind of works both ways. You look back a couple of years ago, we had Luke Donald and Brandt Snedeker in a playoff. There were a lot of people pulling for Luke Donald, I can tell you that. Then you see what (Snedeker) has done since then. It’s six of one, half a dozen of the other. Yeah, you like to see guys like Ernie Els and Luke Donald play well but it would also be great to see Rickie (Fowler) or one of the other young guys win it.

GG: Hilton Head is far from a party destination but your tournament always turns into one of the coolest parties on the PGA Tour. Where are all those young, beautiful, hip people hiding the rest of the year?

SW: I don’t know. We talk about it being the adult Spring Break. Our crowd is getting a little older but they’re golf savvy. We’ve got people that have been coming for 20 or 25 years. We would like for those 30- and 35-year-olds to come for the next 20 or 25 years as well.

GG: During that nightmarish two-year title sponsor search, did you ever consider anything drastic like moving the tournament or changing the name?

SW: We didn’t want (the PGA Tour) to know that maybe we would have considered a Champions Tour event or any other event. We were approached by the LPGA and one of the match play championship events. There were some drastic changes out there but we really wanted to keep a PGA Tour event. We entertained a lot of different things.

GG:  I’m sure you’ve watched the tournament from every vantage point. Where is your favorite place to watch the Heritage?

SW: Because of what I do during the week, I spend the majority of the time between 15 and 18 because all of our sponsors are there. I also really enjoy being on the first tee. I’d like to be there Thursday morning when the first group tees off. There are a lot of great vantage points — places people don’t even think about like on 5 and 6.

GG: You’ve been here since 1986 and have witnessed many significant moments in this tournament. What are your favorite Heritage memories?

SW: I was kind of a drinking buddy with Payne Stewart. He will always have a place in my heart. There was the Greg Norman win with Jamie (Hutton) and Make-A-Wish. There is all sorts of stuff. It’s just knowing these players, their wives and kids. Knowing from when they used to run crazy at the Quarterdeck to being husbands and fathers. It’s the relationships.