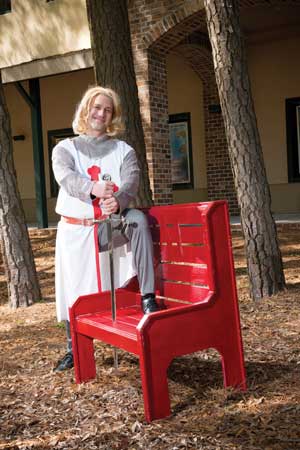 Jeffrey Watkins has made a name for himself locally, on Broadway, and on stage around the world as a master of the theatre. This month, he portrays “Sir Dennis Galahad, The Dashingly Handsome” in The Arts Center of Coastal Carolina’s production of Spamalot, and we’re proud to feature him in the first installment of our reinvigorated On the Bench interview as he opens up on being dashingly handsome, his habit of climbing large mountains, and his alarming command of avian aerodynamics.

What is your name?

Sir Galahad! Knight of the Round Table, also know as “Dennis the Mudgatherer”

What is your quest?

What is your favorite color?

How long have you been acting?

I started acting in high school and started professionally shortly thereafter. I have been a member of Actors Equity (the professional Actors union) for 20 years.

Are you married? Any children?

I am married to Kathleen Watkins and we celebrate our 16th wedding anniversary during the run of the show. We met on a tour of Jesus Christ Superstar in the early ’90s. She is also in the business. She does a lot of choreographing around town and will be performing in the next show at the Arts Center, “Chicago.” We have two sons Caleb, 11, and Dillon, 9.

What drew you to the role of Galahad?

His hair. Definitely his hair. I don’t have much of my own to play with anymore so I would like to express my gratitude to whomever agreed to have their glorious blonde locks shorn so that I may once again live in a yesteryear when I had a long flowing Fabio hairdo!

What’s your favorite song from the show?

“The Song that Goes Like This,” getting to reunite with Meredith Inglesby. Meredith and I have performed together many times. The first time was in my first show at the Arts Center, “Some Enchanted Evening” in 2000.

What do you do when you’re not acting?

I own and operate a housekeeping business on the island called Best One Cleaners. I started it in 2000. My hobbies include piloting small planes, hiking (I hiked up Mount Whitney, the tallest peak in the contiguous U.S., last August). Playing with my family, biking, writing music.

What is your favorite spot in the Lowcountry to unwind?

Pinckney Island! Nothing like a run on the nature preserve to clear your mind.

What is the airspeed velocity of an unladen swallow?

The speed of a flying animal is roughly three times frequency (wing beats per second) times amplitude (U ≈ 3fA). As a European swallow beats its  wings 15 times per second (or 43 times per second as it is incorrectly stated in the show) and has an amplitude of .22 meters per beat we can formulate the following:

Method two for figuring airspeed velocity of a sparrow involves a Google search which returns a value somewhere between 9-11 meters per second or roughly 24 miles per hour.