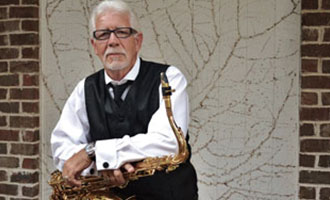 “We’re going to be here until the wee hours,” he promises a midweek audience at The Jazz Corner, suggesting a special night at one of his ongoing gigs in a local career that spans four decades and counting. “Of course,” he adds with a grin, “this is Hilton Head so the wee hours means sometime between 9:30 and 10 o’clock.”

He swings into a Sinatra standard, “I’ve Got the World on a String,” alternately clipping and extending mid-range vocal notes as a seasoned trio lays down stellar support. The Bobby Ryder Quartet segues into “Where or When” and it won’t be long before the front man reaches down for one of his three saxophones and accents the accompaniment with a graceful soprano solo storm and learned trade-offs with pianist Norm Gagne.

Light reflects off a pinky ring as he grips the microphone in his right hand, the left hand lax then extended as he works his way through a dramatic inside take on Perry Como’s “It’s Impossible” that generates vigorous applause. And Ryder’s fashion sense matches the classy vibe and enthusiasm. He’s sharply dressed in a three-piece suit with a pale purple tie and matching pocket square that accents a lean frame topped by a whitened head of hair and goatee that contrasts neatly with his black-rimmed glasses.

Ryder works the room with a casual yet stately air, sipping a scotch and cajoling a wide-eyed young lady onstage for some face-to-face crooning. He’ll later venture into the crowd to get up close and personal with an elderly lady seated near the stage, and Jazz Corner owner Bob Masteller will tote his horn onstage for some cool instrumentals, including a bluesy shuffle on “Coming Home Baby” in tribute to late Savannah bassist Ben Tucker.

“I’m just an entertainer,” the personable Ryder says between sets as he shares a smoke (“all singers smoke”) and  details his love of tradition. “My catchphrase is ‘keeping it alive’ and I feel like I’m on a personal mission to keep this  kind of entertainment going … there aren’t many people that are still doing it like this and we’re kind of a dying breed.”

Indeed, Ryder is a throwback to an era where entertainers always looked better than their audiences and gave it their  all every evening. A native of New Jersey, home to Sinatra and countless other famed saloon singers, he was initially set on rock stardom “playing sax with hundreds of bands” while growing up in a working-class family. He would later step forward as a singer — “I sing like a sax player,” he smiles - and found himself center stage at Radio City Music Hall before making his way as an emerging solo act in Atlanta.

“I’ve always been a fan of great entertainers like Sammy (Davis Jr.) and (Bobby) Darin, but especially the lounge guys like Louis Prima and Sam Butera, where you had to have some extra personality, do a little of this, a little of that, and develop a camaraderie with your audience,” he says. Ryder landed a headliner spot at the famed Royal Hawaiian in Honolulu but stopped in Hilton Head in the early 1980s to break in the show before a three-year engagement that pushed him to the brink of stardom. He returned to the Mariner’s Inn (later the Hilton and now the Omni Resort) in 1984 for a run of month-to-month contract performances that merely lasted more than 14 years and made him an area fixture.

Ryder then invested in ill-fated Club Crescendo (now Mezzaluna restaurant), an ahead-of-its-time supper club concept that cost him his Hilton Head home and forced him to contemplate an uncertain future. “I had to make a decision whether to get out of the business or make this my profession for the rest of my life,” he notes. So he worked tirelessly at any venue available, paid off every investor and re-settled in Bluffton where he and 28-year spouse Lisa have raised a pair of now-grown children.

Ryder’s self-contained tribute shows to the likes of Darin and Neil Diamond — “no matter where I’m working someone asks me to sing ‘Sweet Caroline’” — have become a calling card in addition to his live music shows every other Wednesday at The Jazz Corner. He now has eight solo shows with pre-recorded support that include tributes to Motown and Italian crooners, and Ryder continues to hone a singular stage persona that reverently draws on his favorites in steady shows at local restaurants, country clubs, wherever there’s work.

“All those infl uences are what make my vocals what they are and I’ve always loved the mannerisms,” he says. “Darin was a very ‘handsy’ singer, Sinatra was simply the coolest guy in the room and (Tony) Bennett was always singing ahead of the band and happy to be there, which is how I feel.”

While enthused by new traditionalists such as Harry Connick Jr. and Michael Buble’ on the national scene, Ryder has surely found his own niche and remains determined to keep the flame burning for audiences that are often old enough to remember the originals. “There are plenty of great players and bands around here like Cranford & Sons, but so far there’s only one of me and I feel very lucky about that.”

And Bobby Ryder has no intention of slowing down, even at a time when side passions such as golf and fishing could be taking precedence. “If I could work seven nights a week I would,” he confides. “I still feel good, my throat doesn’t get tired and, well, I just want to be out there and keep doing it.”