WE AREN’T QUITE NEW YORK CITY, BUT IT ISN’T UNUSUAL TO HEAR YOUR HILTON HEAD ISLAND NEIGHBOR TELL HER CHILD SHE’LL BE LATE FOR SCHOOL IN A LANGUAGE OTHER THAN ENGLISH. IT COULD BE GERMAN OR FRENCH OR SPANISH. 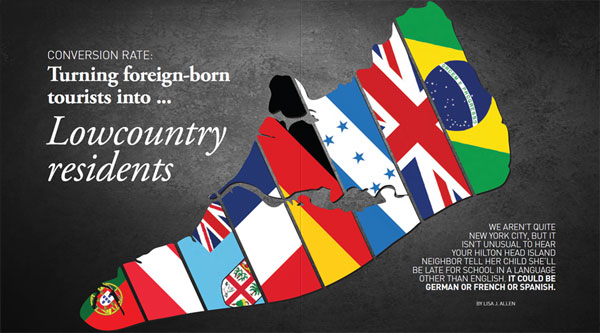 Like Midwesterners or East Coasters, most of those new arrivals vacationed here and then thought of a plan to ensure they would never have to leave: They moved here.

Many Hilton Head and Bluffton foreign-born residents arrived years ago and have gone through the years-long process to become citizens. Our new residents who become U.S. citizens are well educated.

In South Carolina, 35.1 percent of naturalized U.S. citizens in 2011 had a bachelor’s or higher degree, compared to 20.7 percent of non-citizens. Overall, the number of immigrants in South Carolina with a college degree increased by 87.8 percent between 2000 and 2011, according to data from the Migration Policy Institute.

But it’s not an easy process to immigrate, much less become a citizen, said Dave Pierre, who moved to the U.S. from South Africa 20 years ago and now owns the Orange Leaf frozen yogurt shop in Shelter Cove on Hilton Head Island. Now his brother is trying to move here, too, but he has to play the green card lottery, Pierre said. Anyone can apply, but the wait for the rigorous review is two years and there are a limited number of green cards issued each year. “It’s a real gamble,” Pierre said.

Pierre, who became a U.S. citizen eight years ago, splits his time between Boston and Hilton Head, but plans to move here full time. His friends and family from South Africa love the area and visit often.

“The climate is similar and the atmosphere is similar, but without the crime we see in South Africa,” Pierre said.

IT ALL STARTS WITH VISITORS 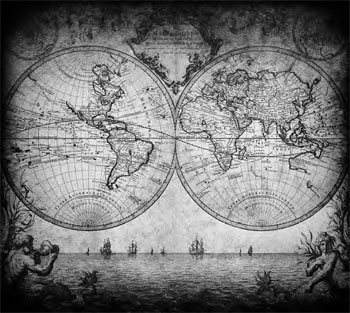 From more foreign-born residents to more foreign company investments in the state, it likely begins with a vacation.

“A lot of the foreign investment came here as a result of a tourist visit,” said Gary Edwards, managing director of Coastal South Carolina USA, a tourism marketing consortium of Hilton Head/Bluffton, Charleston and Myrtle Beach.

A lot of those business owners and executives who traveled here for vacation returned with a business plan. For two years running, South Carolina has ranked first in an annual report on per-capita employment by foreign-owned firms. We’re ahead of Alabama, North Carolina, Kansas and Indiana, which rounded out the top five states. According to the S.C. Department of Commerce, there are more than 1,200 operations of foreign-owned companies located in the state, employing more than 100,000 South Carolinians.

One of those employers is Linda Richards, who owns two Harbour Town businesses with her husband, David.

They first moved from London to the Detroit area in 1993 through a U.K. design engineering and computing company and encountered their biggest culture shock: the weather. “We moved to Michigan in January,” said Linda Richards.

They love living here and said the cost of living is much lower than in England. In London, the thought of buying a house is out of reach for many.

WHOM CAN WE EXPECT NEXT?

They are: Canada (because there are still a few people who haven’t visited yet); the United Kingdom, particularly England and Ireland; the German-speaking countries of Germany, Belgium, Switzerland and Austria; and the newer markets of Brazil and France.

Brazil is a favorable market because their winter is our summer and air travel from that country is getting more convenient, Thomas said.

“We base our work on market research and airline data,” Thomas said. “European travelers have a lot of vacations. They take a lot of short vacations and usually one ‘long-haul’ trip a year. Plus, the exchange rate is favorable between the U.S. dollar and the euro and British pound.”

She said a lot of foreign tourists have been to more commercial destinations such as New York City, parts of California or Disney World, but come here looking to experience a place more authentically American.

“Our natural beauty is very appealing to international travelers,” Thomas said, adding that Hilton Head and Bluffton also share some of their history in the form of our early European explorers. “Our Gullah story really resonates with Europeans, too.”

Someday one might also find new neighbors from China, Edwards said. “On the golf side, we’re seeing new, strong markets in China and Brazil.”

Regardless of where they come from, they’ll find a warm welcome here, Edwards said. While our climate is inviting to European and Canadian visitors, our hospitality keeps them coming back.

“We don’t have to train our tourism employees how to be nice. Their parents and grandparents taught them that,” he said. “We have very welcoming people. Not every tourism destination can say that. That’s what creates repeat visitors: our people. Hospitality is part of our DNA.”

And from those warm welcomes come new foreign investment and new neighbors.