Mack Brown Jr. has joined the Town of Hilton Head as a community code enforcement officer. Brown will enforce the town’s municipal code and land management ordinance related to environmental, public safety, health, sanitation and other general regulations. Prior to joining the town, he served as a lieutenant for the South Carolina Department of Corrections in Ridgeland.

Yazmin Winston Black has joined the town of Hilton Head as community development coordinator. She will be responsible for technical, financial, and administrative duties. She joins the town from the Lowcountry Regional Transportation Authority, where she worked for nine years as an operations manager and most recently as their chief safety officer.

Escape Island has opened on the island. A grand opening was Oct. 8 on Main Street. The business promises to be the newest and “most captivating” escape room in the state. Escape storylines are set for different levels of difficulty.

Chris Blankenship was recently introduced as fire rescue chief for the Town of Hilton Head. Blankenship came to Hilton Head Island Fire Rescue as a college intern in 2001. He was promoted to senior firefighter in 2004 and captain in 2014. In 2018, he was named Deputy Chief of Operations. “I am honored to have this opportunity to serve as chief and continue to work alongside a very dedicated, caring, and experienced team of first responders,” Blankenship said.

Glenn Miller of Okatie has been appointed to serve on Beaufort County’s Planning Commission. He replaces Frank Ducey and will fill the remaining term until February 2023. Miller, originally from Pennsylvania, relocated to Beaufort County after retiring in 2021.

Cassandra’s Kitchen has opened in Old Town Bluffton on Promenade Street. Previously the homeware and kitchenware shop was on Red Cedar Street. The new location is a “bigger and brighter space” according to the website.

Leslie Rohland received the 2022 inaugural Greater Bluffton Chamber of Commerce Women in Business Award. She is the founder and owner of many Bluffton businesses, including The Cottage Café, Bakery & Tea Room, The Juice Hive, and May River Coffee Roasters. The award was created to recognize women in business who have demonstrated exceptional growth, change and impact in the Greater Bluffton area. Since 2009, she has employed more than 400 residents. 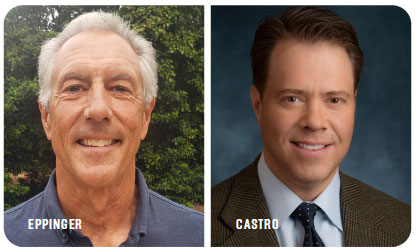 Dave Eppinger of Hilton Head Island, a five-year volunteer, was named to the board of directors of Second Helpings. He is a retired business executive with experience in the engineering and construction industries and transportation infrastructure. Eppinger is a truck volunteer and day captain and a member of Second Helpings’ Events and Marketing Committee. Earlier this year Eppinger was named Hilton Head Volunteer of the Year.

Board-certified, fellowship-trained spine specialist B. Andrew Castro, M.D., has joined BOSS Orthopaedics (formerly known as Beaufort Orthopaedic, Sports & Spine), with offices in Hilton Head Island, Bluffton and Beaufort. A graduate of the University of South Carolina School of Medicine, Dr. Castro is a member of the medical staff and performs surgery at Beaufort Memorial Hospital.

The Hilton Head Area Home Builders Association announced Coastal States Bank as the 2022 Presenting Sponsor of the Annual LightHouse Awards. The awards, established in 1999, recognize quality craftsmanship and design excellence in home construction. Winners will be named at the awards gala Nov 18.