Amy Fee, a Hilton Head Island resident, was recently named to the board of directors of Second Helpings. Fee has extensive experience in sales and marketing. She retired in 2019 from Morgan Stanley as vice president and director of business development.

2. UNITED WAY OF THE LOWCOUNTRY NAMES NEW BOARD MEMBERS

Wentworth joined the pharmaceutical industry in 1997 and spent the next 24 years with Sanofi and Cipla and most recently was the vice president, head of sales and vice president, head of US Market Access. As Boys & Girls Club CEO, his responsibilities include leading the organization’s strategic direction, oversight of organizational operations, financials, programming, brand reputation, talent recruitment, resource development, and stakeholder relationships.

5. HOPEFUL HORIZONS ANNOUNCES 2022 BOARD OF DIRECTORS

“It is an honor to be named chairperson of the Board for Hopeful Horizons, an organization that provides critical services and support to families across the Lowcountry,” said Rumer.

Courtney Hampson has been named chief operating officer of Bluffton Self Help. She will support the growth and development of basic needs, learning and literacy programs and oversee all facets of operations and strategic planning. Hampson served on the board of directors several years ago and recently supported the mission through consulting work. A marketing and operations professional, she has more than two decades of experience in strategic communications, branding, community building, public relations, programming, and business development in both the non-profit and for-profit sectors.

8. HOSPICE CARE OF THE LOWCOUNTRY WELCOMES DEVELOPMENT AND MARKETING TEAM 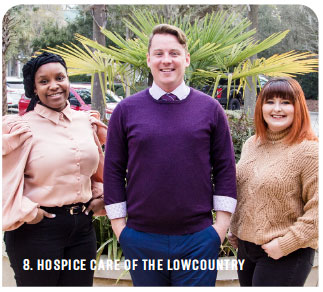 James Dismond, Sharonica Gavin and Kacey Floyd have joined Hospice Care of the Lowcountry as its new Development and Marketing Team.

Gavin is the community engagement specialist. She is responsible for establishing and maintaining community relations, developing beneficial partnership and providing oversight of outreach and engagement strategies. Gavin attended the University of South Carolina Beaufort where she majored in public health.

Andrea Land has joined ROC Dental Group as a dental assistant. A native of Auburn, Ala., Land has lived in the Lowcountry since 2010 and brings 13 years of experience to the practice.

Alan Eisenman was named finance director for the city of Beaufort. He has worked for the city’s finance department as a senior accountant since January 2016. Eisenman graduated from Wofford College in 2005.