Ken Thomas has been promoted to chief of operations at The Greenery. During his 30-year career, Thomas has owned and operated three landscape companies including Scapes Group in Atlanta.

Thomas has worked with The Greenery since 2016 as an advisor, consultant, trainer and most recently as VP of Maintenance Operations.

The Hilton Head Island-Bluffton Chamber of Commerce has added Lilly Strickland as new visual content manager and Shelby Wielgus as membership executive. Strickland will oversee the organization’s in-house recording studio and produce visual content for its communication channels. Strickland graduated from the University of South Carolina.

Wielgus will be part of the membership team’s efforts to deliver benefits to chamber members. A native of Colorado, Wielgus is a graduate of Elon University and was previously an intern at the chamber.

Adriaan Radder has been named general manager at Sonesta Resort Hilton Head Island. Most recently, Radder was general manager for Mandarin Oriental in Washington D.C. His experience in hospitality and luxury hotels spans more than 30 years. He earned his bachelor’s and master’s degrees in International Hospitality Management from Florida International University.

Walterboro in Colleton County is home to Hopeful Horizon’s new office. The office will assist victims of child abuse, domestic violence and sexual assault with information, advocacy, therapy and other critical services. The location was made possible through the Coastal Community Foundation’s Catalyst Grant. 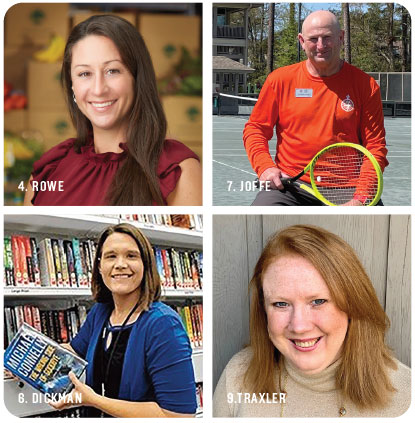 Graeme Joffe has been hired by Sea Pines Country Club as its new assistant tennis and pickleball professional. Joffe will assist director of tennis Matt Wuller and tennis professionals Eddie Goodson and Dave Gleason with a variety of operational and instructional facets. Joffe was a CNN international sports anchor and an investigative sports journalist in his native city of Johannesburg, South Africa.

Google announced plans to invest $7 billion to create new jobs nationwide and invest $500 million in South Carolina, expanding its data center in Berkeley County. Google established operations in South Carolina in 2007, and the expansion brings the company’s investment in the state to $2.9 billion. Google said it has created more than 800 jobs in the state.

Theresa Dileo has been named to head the human resources department at The Landings Club in Savannah. Dileo, who began her career at The Hilton Riverside in New Orleans as human resource director, recently was vice president of HR at Garden of the Gods Resort and Club in Colorado Springs.