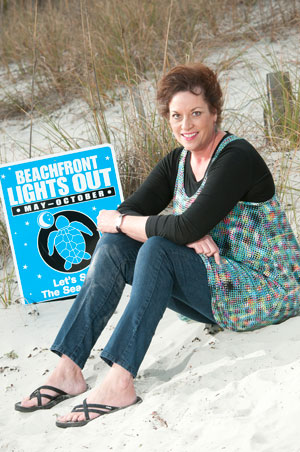 “I named my store Loggerheads for two reasons. One of them is that I love loggerheads and I think it’s really cool that they come back to where they nested from in about twenty to twenty-five years. Another thing that is kind of cool about them is that they go hang out in West Africa for about that long, and then they come back to the island where they were hatched and lay their own eggs.”

This Hickory, N.C. native does quite a bit of traveling herself.

“I live half the time in Virginia, and half the time here. My husband and I own a company that provides in-home services for people with mental disabilities throughout the whole state of Virginia.” Taking care of people comes naturally to Stafford. Having spent her life in healthcare, Stafford uses her retail chops to care for another group of people

“Half of the items that we sell in the store are fair traded from third-world countries,” she said.

She carries a  variety of products, ranging from jewelry to kitchenware, most of which are hand-crafted by artists in third-world countries. She sells them in an effort to raise awareness and help their local communities. But it isn’t the housewares and décor that make Loggerheads sensational. It’s the turtles themselves.

“We try to get folks to adopt nests from the store (in relationship with the Coastal Discovery Museum). They tell you where the nest is, what mile marker it is at on the beach, they tell you when it was laid, and then they send you an email telling you how many turtles came out of it and hatched. It’s cool to do with your kids,” she said.

This connection that Stafford has to her surroundings is admirable. Her instinct to be involved in nature runs just as deep as the turtles’. Her understanding of how we, as people, must take care of nature in the same way that nature takes care of us extends into other realms of her life.

“I live half the time in Virginia, and half the time here. My husband and I own a company that provides in-home services for people with mental disabilities throughout the whole state of Virginia.” Taking care of people just as she does wildlife comes naturally to Stafford. Her two grown daughters are well-educated and spoken of highly by their mom.

“We bought a house here a little over six years ago. I needed a better excuse to spend more time down here. In the meantime, I had gone to Haiti and adopted a couple of boys and we’re currently putting them through college. I have been blessed and they are just great boys.”

Her extension of kindness to all species is what makes Stafford so intriguing. Just look at her precious puppy, Suzy. When it is so easy to just look away or pass the responsibility to somebody else, Stafford steps up and offers a helpful hand.

“I don’t know what it is about the island but it seems like during certain times of the year, different things are abundant on the beach.” Surprisingly, she wasn’t talking about tourists. “In the spring, there are starfish everywhere. I just love it.” Even though she has been here for years and knows these beaches like the back of her hand, she is still able to find something new to fall in love with every season.

“I’m not sure where the good Lord will take me next, as far as what to do. I’m just trying to give back. I just keep going.”