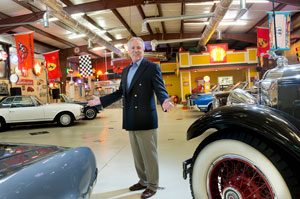 But, if you happen to be driving by at the right moment, you might see that garage door open. You might see a midnight black 1964 GTO convertible come rolling out, growling forth from the neon fog within the garage. At this point, you might be forgiven for thinking you’d driven past the Batcave. And you wouldn’t be too far off.

That glimpse of American muscle car taking to the streets would be your first, and only, hint that this nondescript commercial building held secrets.

It’s not the Batcave, it’s the mancave. And it’s the property of Hilton Head Island Bob Gregory. If you don’t know Bob Gregory, and you’re a man, let’s just say he’s about to become your new hero.

“This is what 70-year-old-men do; write letters to the editor and build mancaves,” Gregory said with a chuckle.

And while most men will convert a garage or use a small corner of the house for a pool table, Gregory thinks a little bigger. When the garage in the Wexford home he shares with his wife Tracey began feeling too cramped, he purchased the former offices of a roofing company and began an eight-month quest to turn the empty building into a proper hangout.

First, he scraped the floors clean (“This guy came in with a diamond cutter. When they were scraping, the guy next door almost called 911 because he thought the building was on fire, there was so much dust pouring out.”), then he began the endless process of cleaning out the rafters (“I went around the whole place with a vacuum cleaning out spider webs, bees nests, bird nests, you name it.”), and moving in the gear, including a full bar, couch, pool table, flatscreen, dart boards, enough Americana decorations to choke a TGI Fridays, a working disco ball, professional-grade karaoke equipment, a Christmas Story leg lamp, a real elan head, 12.5 tons of air conditioning and, of course, the cars.

Gregory stores 11 classic cars in this garage. They’re not all Gregory’s, mind you. Just the GTO, a 1964 Camaro, a 1929 Packard (one of only two in the world), and a 1923 Ford Pickup painted up in Shell gasoline yellow and parked at a faux gas station in one corner of the garage. The rest belong to his friends, members of the coolest club on the island.

But cool doesn’t necessarily mean exclusive. Gregory happily opens up the mancave for a good cause, as he’s already hosted parties and fundraisers for the Arts Center, the Boys & Girls Club, and other groups.

“I said to (Arts Center president) Kathy Bateson, ‘I’ve gone to a zillion fundraisers at the gallery.  If you have a fundraiser here, guys will come. Their wives won’t have to drag them, they’ll want to come.’”

The mancave is just another achievement by Gregory, who took a golden rule (never cheat anyone) and turned it into a lifetime of success and philanthropy. And cars. After graduation from Northwest Missouri State University, Gregory had one of those bolt from the blue moments and decided he wanted to be a stockbroker.

He began with a  firm based out of St. Louis, coming on board as the eighth partner. That firm was Edward Jones Investments, and today the firm claims thousands of general partners and billions of dollars in revenue. You may have seen the St. Louis Rams play in their dome.

“I drove all over the country with Teddy (Edward D. Jones, son of the firm’s founder) , and he told me, ‘you have to be fair and treat people right.’”

Gregory followed that advice, and was soon being quoted on the front page of the Wall Street Journal and leading teams that would spread Edward Jones nationwide.

And while he still serves as partner with the firm, his time is now spent on charitable works (he organizes a golf tournament every year for the Arts Center and is on the board of the Southern Seniors Golf Association. That’s a lot of golf for a guy who claims to not golf. We wouldn’t bring it up in the mancave, but Tracey is club champion at Wexford) and, of course, building his man cave.

“I’ve spent money on women, wine, cars,” he said with a smile. “And the rest I’ve wasted.”