Not a word out of place

Roger Pinckney writes for his love of the Lowcountry

Just like his writing, Daufuskie resident and prolific author Roger Pinckney is succinct and entertaining. His voice is in cadence and in keeping with his salty, southern upbringing, drawing out some syllables, omitting others and always reflective of his hard-won wit and love for the Lowcountry.

In a virtual interview with Monthly, Pinckney, a voodoo aficionado (one of his works is, “Got My Mojo Workin’: A Voodoo Memoir”), discussed some of his bestsellers like “Blue Roots” and “Reefer Moon,” his most recently published work “Washed in the Blood” and an upcoming project he is co-writing with Michael Dewitt Jr. about the Murdaugh family and “a culmination of missteps going on for over one hundred years.”

With insightful one-liners like, “I learned young not to buck the tide,” Pinckney also talked about his respect for the outdoors and “nature’s ability to change the human heart.” 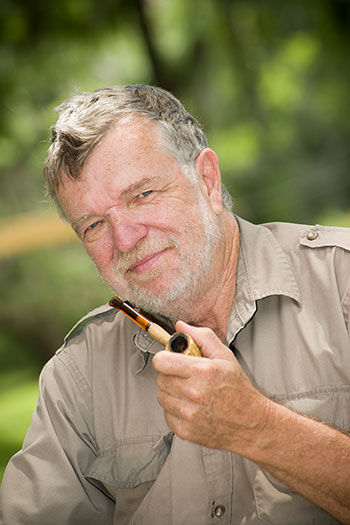 Pinckney — who believes “getting it right is the most important thing” — continued, “Hemingway’s economy of words immediately draws you in to his story.”

One of Pinckney’s favorite reads is a lesser-known essay Hemingway wrote in the middle of winter about shooting game birds, Pinckney said.

Apparently, Hemingway hired a kid to throw pigeon clays for him to conjure up powerful memories, creating a work that “is beautifully written and not a word out of place.”

Pinckney says writer Cormac McCarthy “taught me not to be ashamed of paraphrasing or using the King James Bible.”

There’s no definitive writing process for Pinckney, who has published 15 books of fiction and nonfiction. Instead, it’s all about grabbing that moment of inspiration.

“If you get an idea at 3 a.m., you better write it down because you will forget it by daybreak,” he said. “If an idea comes in the middle of the night, I don’t turn on the computer, but I do write down five to six words on a scrap piece of paper to trigger my memory.”

Pinckney also believes in writing what you know because “it won’t take a savvy reader any time to know if you don’t.”

One thing he knows well is the Lowcountry. There’s no need “to make stuff up.”

“I know the people. I know how to rearrange and massage [their stories] and then I’ve got a story,” he said.

He also knows where to find motivation.

“My greatest influence is the power bill. Writer’s block is not a luxury I can afford,” he said.

It is for this reason his days are structured.

His 140-pound Labrador retriever gets him up at first light (generally around 6:30 a.m.). Pinckney gets coffee, takes the dog out, checks his emails, sees “what business” he has generated on Facebook, eats a big breakfast at mid-morning and then starts writing.

Pinckney said he does not waste time.

Animals often appear as almost characters in his books. Pinckney said it’s all about keeping the plot moving.

When asked which of his books is his favorite, Pinckney said “Reefer Moon” and “Blow the Man Down” but then, like an outgoing tide, he changed directions and talked about his essay, “Souls of Poets, Washed Ashore” which recounts his experience with being struck by lightning.

In the essay he writes, “The ancestors may have died, but they ain’t dead. They walk among us every day. They watch our moves and discuss us privately amongst themselves. Properly petitioned, they can help or hurt.”