Hairstylist to the stars

Dennis Stokely continues to dazzle in the Lowcountry

It is a perilous understatement to say that these past few years have been, well, interesting. Apart from everything else, though, one of the most intriguing developments of these early 2020s has been the rebirth of the mullet. If you’re one of the fashion-forward folks who have brought back the Kentucky waterfall, we have good news for you.

Dennis Stokely, hairstylist to the stars, thinks you look amazing.

“I am team mullet,” he said with a laugh. “I’m thrilled that we are living in a time that is embracing all of these unique and fun looks… I think humanity in general seems to be a little more embracing of things outside the norm, and I think it’s freeing people to be themselves.”

Where the rest of us see business in the front and party in the back, Stokely sees unrestrained self-expression. But it’s that unique eye that has let him create dazzling hairstyles for celebrities and common folk alike, garnering a name in the industry for his beautifully inventive looks.

And if the mullet represents an evolution, that is something Stokely knows well. 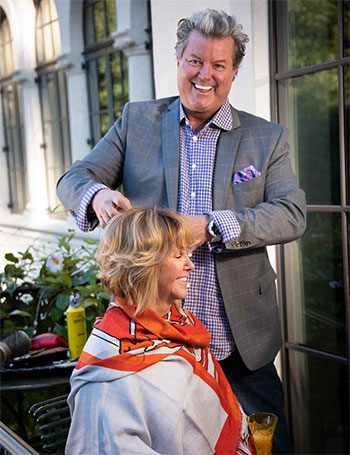 “I was a geeky kid. I was the drum major, winning the spelling bee, being voted Most Likely to Succeed. I was really nerdy,” he said. “My personality didn’t evolve until college.”

Attending the University of Georgia’s school of journalism, Stokely would carry hot rollers in his backpack, doing a brisk trade in $5 hairstyles among the coeds. The rush of being snuck into sorority houses and dorm rooms was second only to the rush of finding his true calling.

“I came back to Savannah, got my license and immediately moved to New York,” he said. “I got to interview with Mr. Kenneth at the Waldorf-Astoria. It lasted one minute. He said, ‘You’re too young and inexperienced, but you’re a nice young man and you can answer the phones.’ ”

Watching the likes of Liza Minnelli, Gloria Vanderbilt and Jackie Kennedy get styled, Stokely knew he was following his passion. And like anyone, he had to start somewhere. After completing his training at the Frédéric Fekkai studio in Los Angeles, he answered the call to style the Jacksonville Jaguars cheerleaders for their inaugural photo. And while he looks back fondly on his time with the Jags, it was when he returned to Los Angeles that his career truly blossomed.

It was here that a chance to work with renowned makeup artist Alexis Vogel at a wedding led to what would have been a one-off chance to style Paula Abdul for a photo shoot.

“It was a 10- to 12-hour shoot and I had to give her all these different styles,” he said. “After the shoot she kissed me on the forehead and said, ‘I have to work with you again.’ The next day Idol called.”

For two seasons of American Idol, Stokely was by Paula’s side during auditions, tapings, PR events and makeup shoots.

“It was the most magical time,” he said.  “Paula is a sweetheart…it was just a pinch-me moment for a kid from the Lowcountry.”

No matter where he went, he took the Lowcountry with him, both in his Southern accent and in his impeccable manners and charm. Celebrities noticed, with the likes of Carmen Electra, Jessica Simpson, Eva Longoria and Fox News’ Dana Perino seeking out his talents.

“Getting a chance to have Dennis style my hair is always more than just a hair appointment — it’s an immersive experience,” said Perino. “You get his creativity and talents, plus hilarious stories that put you at ease.”

Stokely has since returned to the Lowcountry, where he now makes every appointment a red-carpet event.

“For me, doing private clients has been a breath of fresh air,” he said. “The Lowcountry has a really laid-back sophistication. This is really a pretty special area.”