Being in the moment

Rain or shine, she navigates traffic from Savannah in her signature pink helmet to assist with the patients of Dr. Kowalyk, seeing to their comfort.

As the daughter of a career officer, Brown had always wanted lifetime military service. With dreams of becoming a helicopter pilot, she entered the Army and trained as a combat photographer. At the time, digital photography didn’t exist, so she learned to work in the dark room developing prints. Brown’s service included the Gulf War, giving her status as a veteran.

But she ended up leaving the Army before she could retire.

Post traumatic stress disorder-military sexual trauma (PTSD-MST) is defined by the Department of Veterans Affairs as sexual contact against the will of a veteran. Brown said she was assaulted by her superior officer during her service. The case was reported but she said she wasn’t believed, finding herself placed under his supervision again. Having a situation of abuse from a superior eroded her self-esteem and gave her trauma.

When she left the military, Brown worked to improve her PTSD-MST symptoms.

It wasn’t until she went to the Veteran’s Administration to ask for help that she found relief. She was officially diagnosed and found a therapist who was pivotal in her recovery. 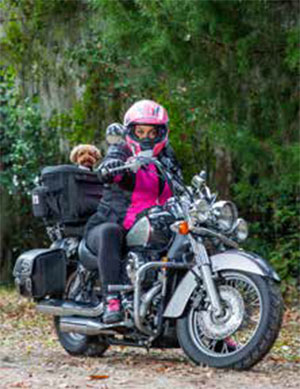 That breakthrough led to a new love.

“I’ve always wanted to ride a motorcycle, but I just didn’t have the confidence I needed because of everything that comes with PTSD,” she said.  “When I found the right counselor, she was able to unlock a lot of doors and release a lot of pain and anger. Then I was able to pursue the bike riding.”

With her comfort level and the evidence of her adventures on her compelling Instagram, you’d think that Brown had ridden motorcycles for years.

Actually, she started in October 2020 as COVID restrictions began to ease. She attended the New Rider Academy at Savannah’s Harley-Davidson and obtained her license.

They took in the scenery and learned about another chance to ride nearby, the Tale of the Dragon in Deals Gap, N.C.

Unaware of what she was signing up for, Brown thought it might be a fun ride. For 11 miles she and Jasper traversed over 300 twists and turns with names like Wheelie Hell and Beginner’s End.

She was proud, “I had to learn on the job how to maneuver those curves. I might have been a little slow, but I made it. It put a hunger in me to start conquering different things. On my next trip, I went west.”

As a mother of four, grandmother of nine with seven grandsons and two granddaughters, Brown stays busy with family and friends. The kids are pretty sure that their Yaya is the best, or at least the coolest grandmother that’s ever ridden a motorcycle.

She’s glad they’re proud of her but mostly thankful to have the ability to regain control of her life and defeat fear.

“The longer I ride, the better,” she said. “Since I’ve been riding, I don’t suffer like I used to, though if I didn’t tell you, you would never know I was suffering.”

She credits the bike with retraining her mind to cope with her PTSD-MST symptoms and taking back control of her life. “Being on Bella, the one thing I do know is that I have to be in the moment. That’s huge for me because with PTSD I can choose to live in the past. To be able to have command of such a machine is absolutely wonderful to me.”

“I didn’t realize I was going to enjoy being alone so much. I’m a long-distance rider,” she said. “I wanted to be a helicopter pilot; now I’m flying on the ground.”