When Lee Jenkins was a teenager, he was aboard his beloved Palamino stallion, riding at top speed, when the saddle snapped. Jenkins went hurtling face first into the dirt road. When he looked up, he expected to see Smokey bolting away.

But he didn’t. Stallions have a reputation for stubbornness and a bit of a wild streak, but Smokey turned around and returned, lowering his head so Jenkins could pull himself up.

“He could have kept on running, right on back home to the barn,” Jenkins says. “He came back and picked me up. It’s just a bond between a horse and a human that is so rewarding, but it’s one that you don’t ever want to take for granted.”

It’s a bond that has helped shape Jenkins into the man he is today — a decorated Fire Captain and paramedic with Hilton Head Island Fire and Rescue, and a budding horse breeder, even if he likes to keep some of the details to himself.

Jenkins started riding horses when he was just 4 or 5 years old — “I was probably able to ride a horse before I could walk,” he jokes — and they’ve been an integral part of his life since he can remember. 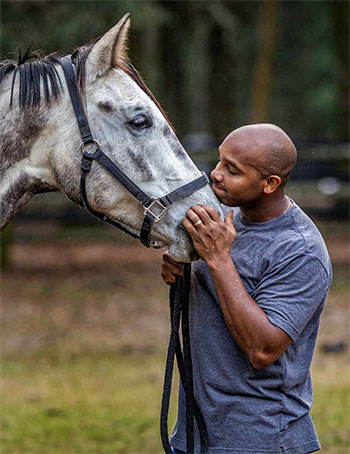 After graduating from the University of South Carolina in 2004 and returning to the Lowcountry, Jenkins was searching for something to feed his competitive spirit.

Though he is private about the details, Jenkins is an up-and-coming breeder who was deemed worthy of a profile in Speedhorse Magazine, and he sits on the American Quarter Horse Association’s Racing Committee. He is noted for his relentless quest for more knowledge, picking the brains of the biggest names and brightest minds in the industry every chance he gets.

But at home, he’s just a guy hanging with his horses.

He jokes that his wife, Kerry — they were married on Nov. 6 — thinks he loves the horses more than her (“But she’s got the edge by a little bit”).

“Oftentimes I tell people I’d rather be around horses than people because horses have a way of communicating that is just so phenomenal and awesome,” Jenkins says. “Of course, they don’t do it with words, but they do it with body language.”

Jenkins believes growing up around horses, and learning to read their cues, has helped him flourish as a first responder, rising to the rank of Fire Captain in 2018, just 12 years after joining Hilton Head Fire and Rescue. He earned the department’s Fire Officer of the Year award and the Rotary Club of Hilton Head’s Firefighter of the Year honor in 2020, an honor he doesn’t take lightly, especially given the timing during a worldwide pandemic.

“I think that’s what has enabled me to be a pretty decent first responder and helped me achieve the status that I have now,” Jenkins says. “It’s basically just being a human being and possessing empathy. It’s learning how to read people’s body language, understanding that words are just one form of communication. I learned all of that from horses and animals.”

Jenkins never expected to become a firefighter. His cousin Earl Green was a battalion chief with Hilton Head Fire and Rescue for years, and every time they bumped into one another at church or around town, Green would ask if Jenkins was ready to join the department.

Then he found himself in business slacks and a button-down shirt and tie, rushing to clean out rental cars in the blazing Lowcountry summer when the call came offering a position at Hilton Head Fire and Rescue. He was ready.

“She began to talk about salary and all of that stuff, but I didn’t hear another word,” Jenkins recalls. “I blacked out. I think all I heard was fire department, and I thought to myself, ‘Should I finish washing this car?’”

He takes pride in his work, which he describes simply as, “you get there fast, you treat them nice, you do your best to mitigate their emergency, and you move on to the next one.”

“This is a very selfless profession,” Jenkins says. “People call us heroes, but we aren’t heroes, we’ve just made a decision to put people before us, people we don’t even know, strangers. All for the good of humanity.”