Like many Hilton Head Islanders, Bob Lacey can be found many mornings enjoying life from his sunroom.

Ah, but there’s a difference. From a transformed space at the rear of his Sea Pines house, Lacey is at work in his broadcast studio, busily sending his popular radio show to some 70 U.S. markets and more than 170 nations.

Lacey is the “Bob”’ in the “Bob & Sheri Show,” a syndicated program hosted by Lacey and Sheri Lynch for nearly three decades. The show is a deft mix of talk, comedy, advice and entertainment — all presented with gentle humor and good nature.

For Lacey, the show is a cherished part of a career that has covered a half century, starting in Fall River, Mass. From there, he moved on to become such a mainstay in Charlotte television and radio that he was named to the North Carolina Association of Broadcasters Hall of Fame in 2019. 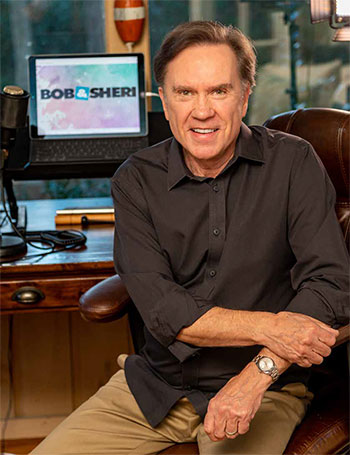 Not bad for a native of New Haven, Conn., who decided against a career as a teen singer while fronting a garage band (“I really wasn’t that good,” he concedes). Through chance, talent, hustle and friendships, Lacey made his way in the world of radio and TV.

While a singing voice wasn’t his ticket to a career, his mellifluous speaking voice has served him well as a broadcaster.

His career caught an early break in Fall River, where radio producer John Lambis brought him aboard. The two became fast friends.

A few years later Lacey was visiting Lambis in Charlotte, where the producer had taken a job at a bigger station. When a member of the station’s broadcast team quit while on the air, Lambis swung into action

It worked, and Lacey was hired for the Charlotte station. In the years ahead, Lacey became a familiar voice on local radio — and a familiar face for a decade as TV host of a local edition of the national PM Magazine.

“It was instant,” said Lynch, who abandoned plans to become an anthropologist after “Bob corrupted me to go into radio.”

“He was hysterically funny and strategic. Now we are like brother and sister going through life together. If I wasn’t doing a radio show with him I wouldn’t want to do radio.”

These days the twosome works separately, with Lynch in Charlotte and Lacey at his Hilton Head home. Work weeks generally include mornings and early afternoons putting together their independent talk show for distribution to stations and through the Armed Forces Network. The podcast version of the show draws more than 300,000 downloads per month.

The pair has gained a following and critical acclaim. They have been nominated for a dozen Marconi Awards for radio excellence. Lynch also has won a fistful of Gracie Awards, given annually to women in broadcasting and named for the late comedian Gracie Allen, the partner and wife of legendary comedian and TV star George Burns.

Lacey, who developed a fondness for Hilton Head while visiting former in-laws on the island, bought a place in Sea Pines in 2014. When the pandemic made working from home a desirable option, he and his wife, Mary, in 2020 made Hilton Head their full-time home and the base of operations for his radio activities and her work as a therapist.

As chance would have it, Lacey said, he wound up living three doors down from his old buddy, Lambis.

“It’s crazy. It wasn’t planned, but that’s how it worked out,” said Lambis, who worked in radio and operated his own public relations firm in Atlanta before moving to Hilton Head eight years ago.

For Lacey, 72, Hilton Head has become a perfect blend of work and play. Among his favorite haunts: island restaurants, The Jazz Corner and Tower Beach for walking his dog, Finn, a 6-year-old Labradoodle.

“It’s a great place to be able to escape. There’s a certain freedom. Besides, Finn loves crashing in the water. He’s got a good life.”

And, Lacey will tell you, so does he.