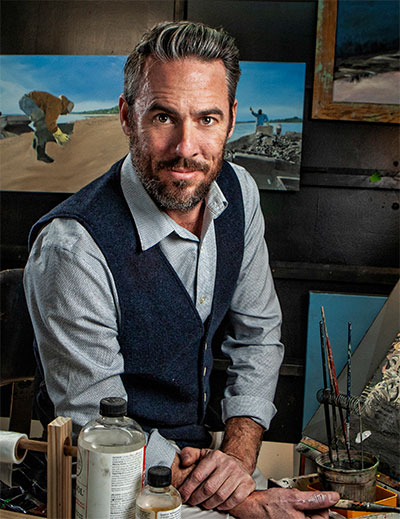 D. Pierce Giltner is not much a fan of playing it safe. His path to acclaimed artist status has come by way of a winding creative road rooted in unconventional carpentry and a forte for chronicling the lives of laborers working the Lowcountry land.

“I knew I had born talent, it was just about teaching myself art and putting it out into the world,” said the Bluffton resident who began using house paint and canvases of reclaimed wood and roofing tin in his native Chester in the mid-1990s.

Construction work paid the bills out of high school until Giltner got the nerve to put his early efforts, depicting early-1900s tenant workers, on exhibition in a Columbia show in 2004. That drew both Best of Show awards and the attention of famed artist Pat Kabore, who offered to mentor Giltner.

“She taught me discipline, time management and how to talk to galleries and market myself,” he said. “She schooled me to always find a niche that no one’s doing and make it a business.”

Giltner decided to move to the Lowcountry in 2007, where he found a champion in Calhoun Street legend Babbie Guscio and an unlikely muse in a Bluffton Oyster Factory worker named Drack.

Giltner launched his open-air “Gallery Without Walls” on Calhoun Street, showcasing his distinctive art and signage work and his depictions of Drack’s life as an oysterman. In 2009, he displayed his “The Oysterman of the Lowcountry” collection via solo shows and in exhibitions at Piccolo Spoleto in Charleston and the Telfair Art Fair in Savannah.

Giltner has spent much of the past decade taking on commission work while transitioning his portfolio from less-durable paints and materials to more collector-friendly oil paints and canvas.  He has also continued to evolve his artisan carpentry business, Rustic Installations, crafting one-of-a-kind furniture pieces and installations.

A unique request from the J. Banks Design Group in 2017 has led Giltner to a new adventure that’s combined his world with that of his subject-turned-friend and newfound collaborator.

“I was asked to build a tabby fireplace in Kiawah Island and it was like this creative awakening,” Giltner said of mastering the artisanry technique centered around an oyster shell-based mixture that’s been a high-end Lowcountry building staple since Colonial days. “Drack and me, we are in this together. He’s my right-hand man in this. It’s a very time-consuming building method but it’s a style that’s in high demand.”

After earning kudos for his Kiawah masterpiece, Giltner made tabby work a cornerstone of his business, branching out to tabby-based fire pits, coffee tables and lamps over the past three years.

“These become works of art when done right, and while there’s plenty of folks trying to create the tabby look, few are actually taking the time to do it right,” he said.

Giltner has shifted his base of operations from Calhoun Street and a brief residency at Bluffton’s Cahill’s Market to his new Burnt Church Road studio, a warehouse behind The Sugaree bakery where he showcases both his paintings and his tabby creations.

While gallery shows and art competitions were canceled over the past year due to the COVID-19 pandemic, Giltner has continued to stay busy with construction work and new commission projects. He looks to have a formal studio opening in the spring and a new solo show in fall 2021.

While his tabby clientele is rapidly spreading to Charleston and Savannah, Giltner said Bluffton will always be his creative home front.

“This place is magic,” he said. “The people and the inspiration here are too special for me to ever dream of living anywhere else.”