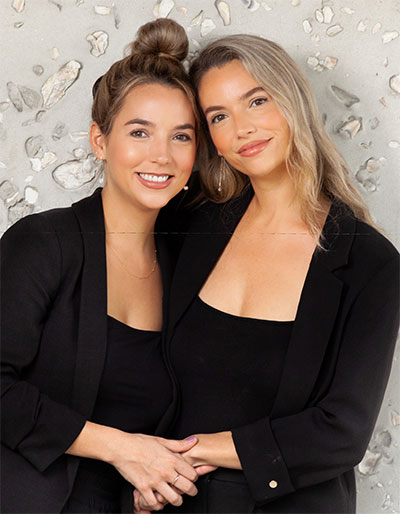 It started in 2018 with a photo that Kaylynn Williams had posted on Instagram. The photo itself was nothing particularly remarkable for the young Bluffton native, just a shot of her and a friend. What was remarkable was the comment posted beneath it, from a casting director at CBS’ The Amazing Race telling her to check her DMs.

“I had to look him up. I thought I was getting catfished,” she said with a laugh.

She wasn’t. Something in that photo had piqued the interest of the show’s producers, and within days Kaylynn and her sister, Haley, were whisked away to a Los Angeles hotel where they and several dozen other hopefuls were monitored, interviewed, subjected to psychological screenings and otherwise filtered down to determine whether they had what it took to create compelling television.

“We were super sequestered in this hotel; it was so boring,” said Haley. “We were only allowed to leave our room for interviews or to go to the gym. We literally spent our time throwing an apple back and forth in our room until it broke.”

The boredom ended abruptly when the sisters found out they had been cast, at which point the excitement shifted into high gear.

As contestants on the reality show, they squared off against other teams that included former Carolina Panthers players DeAngelo Williams and Gary Barnidge in competitions all over the world. Goat racing in Trinidad and Tobago. Navigating a Brazilian market with a list written in Portuguese. Solving puzzles inside a film studio in Kazakhstan.

Globetrotting was nothing new to the sisters, who had traveled together for six years with Audi Sports Experience. Yet everywhere they went, they faced the same hurdle that pesters nearly all Americans who travel abroad.

“Driving a stick was not comfortable for us. It was in Paris, it was snowing, and we were in rush-hour traffic,” said Kaylynn. “Every time I’d have to stop the car, it would stall.”

And since this is reality television we are talking about, there was plenty of drama along the way. When they crossed the finish line for the final time, it was clear to viewers that the sisters had been victim of the “Mine Five,” an alliance that had formed among several of the other teams.

“We’ve received so much love because people think the Mine Five bullied us. That’s how it looked on TV,” said Kaylynn. “Editing definitely played a hand in making it look like they did it in a nasty way. But even after the show, we grew close to them.”

After elimination, the sisters found themselves members of their own alliance, a group they called the “Sequester Six.” While the remaining contestants continued their adventures, the Williams sisters joined their fellow eliminated cast mates at a luxurious house in Prague where they were feted with mani/pedis and meals cooked by a private chef.

“If you’re going to lose on this show, lose early because you get a paid vacation in an awesome city,” said Haley.

As teams joined them in exile one by one, true bonds formed that still last to this day.

“When we got back in 2018, we started a group chat. We have all talked every single day,” said Haley. “We’ve done two reunions that we planned ourselves. We genuinely love each other.”

With two years between shooting and airing, and strict confidentially demanded from CBS, the Williams sisters had to keep a tight lid on what was going on.

“It was extra tricky, because we all got really close,” said Haley. “We went on multiple trips together, took pictures together, and people would ask, ‘Who are your friends?’ We had to make up little white lies. We were surprised we didn’t hear anything (from CBS).”

And now that the secrecy is past (viewers witnessed their elimination in November), it’s allowed the sisters to relive their race around the world.

“I still can’t believe Haley and I got to experience all that,” said Kaylynn.

Ultimately, despite elimination, The Amazing Race was worth running for the sisters, who now live in Charleston. And their adventures together are only beginning, with the sisters opening a real estate business together called Selling the South.

You can stream past episodes of The Amazing Race featuring Kaylynn and Haley Williams at cbs.com.