CHRISTMAS VILLAGE IS A WHIMSICAL FAMILY TRADITION
Montreal, December 1954. Edward (Ernie) Monahan, to the delight of his children, places a few tiny reindeer and other miniature Christmas figurines into an empty fireplace.

“We were excited when dad started putting it up,” remembers his son Hartland, recalling the moment with his brothers Glenn and Kim. “It was magical back then.”

A sweet and simple act unknowingly starting a 70-year tradition that’s grown piece by piece into a nostalgic playground.

In an ode to his now late father, Hartland has taken over this annual spectacle, and is now welcoming the Lowcountry community to take a peek. Beginning Dec. 1 and throughout the month, the WaterWalk Apartment lobby at Shelter Cove Towne Centre on Hilton Head Island will be home to his family’s whimsical Christmas village. 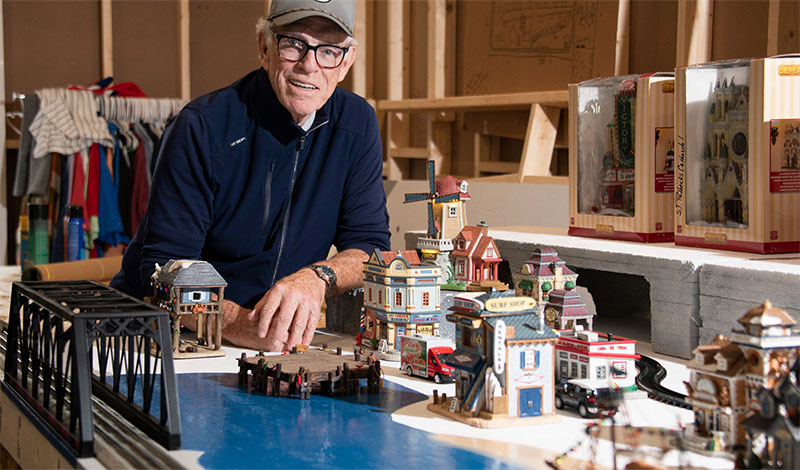 Hartland is a proud and sentimental son, father and poppy (grandpa) when setting up the more than 100 model replicas.

“I feel that my dad is there with me, working on some of my ideas,” says Hartland, a Hilton Head resident who competed in the National Hockey League in the 1970s and early 80s.

There are lights and movement in almost every building, ride and vehicle, as music and laughter play on. Hartland remembers his father finding pieces at yard and garage sales. He would barter, trade, and over time, gathered quite a collection.

“At one point, dad decided to build an addition onto his own home, just to accommodate his growing Christmas village,” says Hartland. 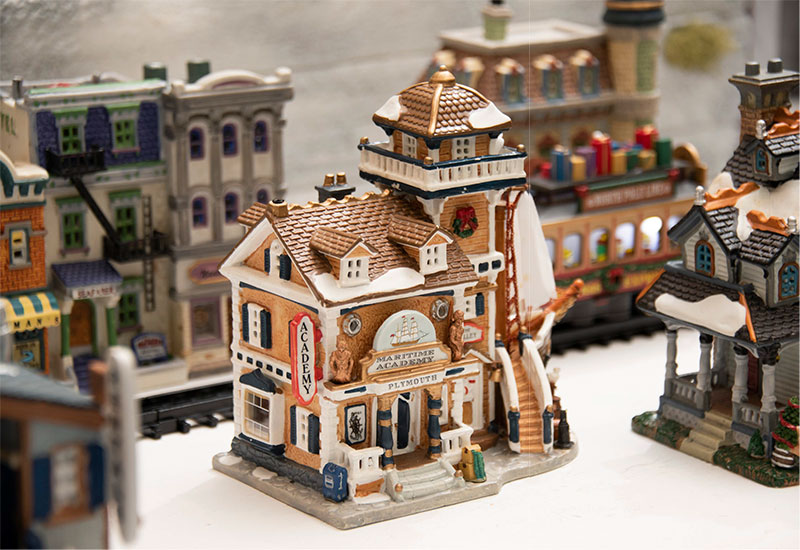 And when the holidays came around, Ernie would work through the night, for weeks, to complete it.

Sharing the collection was a natural extension of his father’s work and love for family. Throughout the years, Hartland’s wife, Linda, his children and grandchildren have all taken part in assembling Ernieville.

“Having my granddaughter, Sterling, take part in it is a great help,” he says. “She once said, ‘Poppy, wouldn’t it be nice to start adding more pieces?’”

Oh, yes! And that he did. Family is his heart, and he talks of the joy it brings him.

His mom Agnes, daughter Mechelle and her family, son Shane, and youngest son Joey and his family, support their father’s vision and continued passion. 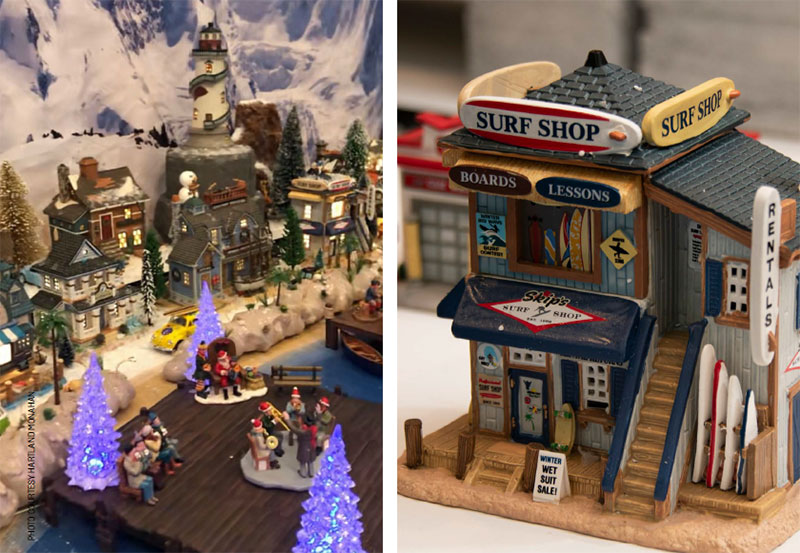 “We really began to outgrow the space it needed,” Hartland says, and soon the displays could be divided into separate landscapes.

He appreciates the WaterWalk’s staff for opening their space to the community.

“It is such a warm feeling to bring joy and happiness to all who step into that foyer,” smiles Hartland.

The Ernieville Christmas Village is open Monday through Friday 10 a.m. to 5 p.m. It is free to the public. Collection for St. Jude’s Children’s Hospital is an optional donation in the lobby.

Snow-covered ski mountains sprinkled with happy skiers and ski-doos, and more than150 decorated Christmas trees. Cozy chalets and children rolling snowballs, waiting for the hot chocolate vendor and their turn on the hot-air balloon ride. Reindeer and yuletide rides are ready to greet you, and, of course, that jolly old St. Nick. Listen closely for carolers singing. 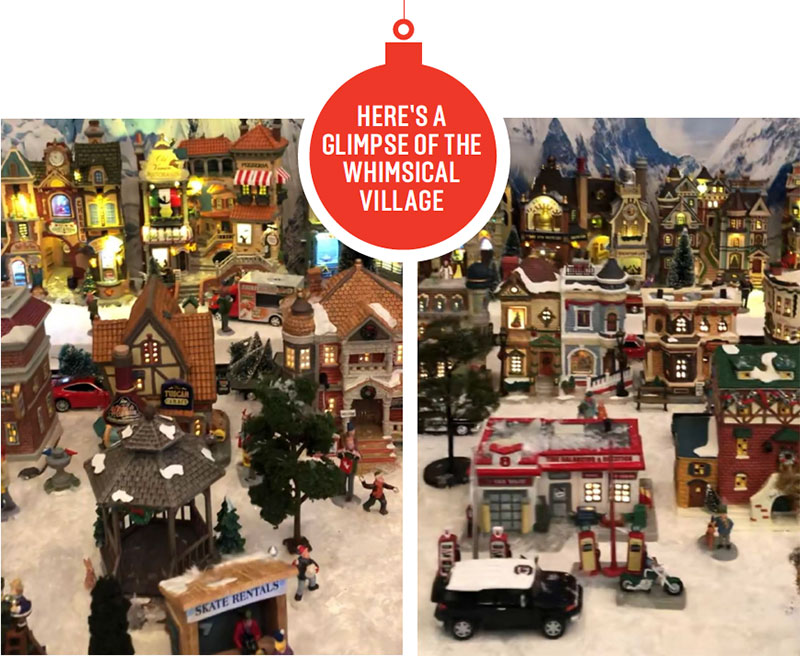 Busy streets with bars and businesses await. Two trolleys and several motor cars run through downtown’s white-lined streets. Moms with their children hurry to cross. There’s a heated hockey game on one of several ice ponds, and a rink of happy skaters. A tunnel opens to see the Polar Express train passing over a bridge, and city-sounds are heard throughout Main Street.

A community of faith denominations are represented here. A replica of the original Central Synagogue and St. Patrick’s Cathedral in Manhattan brighten up this display.

Surf shops, boats, and water all around. A sailor’s dream village, complete with three lighthouses, sand dunes, and a moving windmill. A large shrimping boat and sailing ships are nearby. Look for the group of fishermen hanging around the popsicle-stick docks, waiting for a catch.

Movement is the word here. A fair like none other, as many familiar rides are on display: the World’s Fair Ferris Wheel, two balloon rides, a round-a-bout, parachute ride, roller-coaster, and the deadly spinning swing. Listen carefully for children screaming, ‘Weeeeeee’ and ‘I feel sick!’