Humans have a deeply embedded, natural fear of apex predators in their environment. So, when it comes to the ocean, it’s no surprise that sharks haunt the human imagination.

Thanks in part to Peter Benchley’s best-selling novel “Jaws” and the blockbuster Steven Spielberg movie it spawned, fears about sharks went into overdrive in the mid-1970s with devastating consequences for shark species and their ocean environment.

But Hilton Head High School senior Delcie Swift has a message for anyone afraid of sharks: they really aren’t scary or particularly dangerous.

“I want to teach people not to be afraid of sharks,” she says. “The occasional shark bite does happen, but it’s so unbelievably uncommon.”

When Delcie began to consider projects for a Gold Award — the highest recognition given by the Girl Scouts of America — she decided she wanted to educate the public about sharks. On a suggestion from shark expert Kim Ritchie, associate professor of Natural Sciences at the University of South Carolina Beaufort, Delcie zeroed in on educating elementaryage kids.

Three years later her in-depth project, “Sharks of the Low Country,” has been adopted as an educational tool in the Coastal Discovery Lab at Hilton Head’s Coastal Discovery Museum. The display includes a shadow box and five containers full of shark-tooth fossils; charts describing shark anatomy, skin and how to identify species from tooth fossils; information about threats facing sharks; craft activities; and a guide to shark species found in Hilton Head waters.

“It has been a wonderful sense of accomplishment to hear from museum volunteers that my display is wildly popular among kids,” Delcie, 17, says. “I feel like I’ve made an impact on the age groups I hoped to reach.”

On top of that, on Sept. 15 she received the prestigious Gold Award for the project. Given to just 5.4 percent of scouts, the award often grants advanced rank for recipients upon enlistment in the U.S. military.

Though born elsewhere — “All I can remember is living in a city, and not liking it,” she says — Delcie moved to Hilton Head with her family when she was 6.

She quickly discovered her deep love for the ocean and the beach. 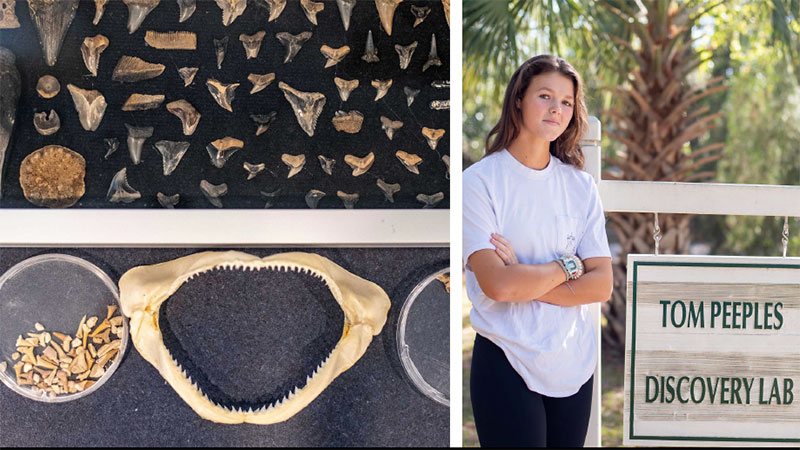 “I grew up with turtles. Since I was 6, I was wandering around with (Sea Turtle Patrol Hilton Head) and doing conservation projects involving “bees, bats and sharks,” she says.

Her father, James Swift, director of golf at Sea Pines Country Club, had her on the water from a young age, even teaching her to pilot a boat.

“He never put caution tape up around me,” Delcie says.

While working around marinas and docks, she realized how many people were “absolutely terrified” of sharks, based on ignorance about a critical part of the ocean ecosystem.

“It wasn’t fair, but they just didn’t understand,” she says. “When you think about it, you are going into their home.”

Shark bites on humans are rare, with just over 3,000 confirmed unprovoked attacks worldwide since 1580 (about seven a year), according to the International Shark Attack File at the University of Florida Museum. Most bites are not fatal: just one of the 47 attacks documented in the United States in 2021 resulted in a fatality. And the lifetime risk of death from shark attack in the United States is 1 in 4,332,817 — more than 50 times less than the risk of being killed by lightning.

“Sharks are animals. They are curious, and the only sensory organs they have is their mouth and the front of their nose. So, they feel things, they bite things,” Delcie notes. “People who are bitten are just in the wrong place at the wrong time,” such as when sharks are feeding on fish.

But on the disastrous flip side, humans kill an estimated 100 million sharks every year, many illegally.

“Between overfishing and the finning industry, sharks are often caught by mistake, and instead of being released fishermen cut off their fins to sell on the black market,” she writes in the project. “Without their fins, sharks drown after being thrown back.”

A two-sport athlete, Delcie plays center for the Seahawks basketball team and is a highly rated softball pitcher. She hopes to receive a softball scholarship and study marine biology in college.

“I’ve known for a long time I wanted to build a career in marine conservation, and I wanted to share that with my community,” she says.

The shark project, she says, “has made me confident that I’ve chosen the right career path.”