Molly Hornbeak remembers the first time she took a busload of children from the Bluffton Boys & Girls Club to see the Atlantic Ocean. “We got to the foot of the bridge to Hilton Head Island, and some of the kids were screaming and crying,” says the club’s only director since its founding in 1998. “They had never seen the ocean!”

It’s not a stretch to say that Hornbeak’s own eyes were opened when she first stepped into the job.

Hornbeak moved to Hilton Head Island from Oklahoma City in 1990 with her family in a whirlwind decision following a family vacation.

“It was paradise. My mother said, ‘You ought to move there,’” she says. “My husband was in the food-andbeverage industry and two weeks later, he was back here working, and I was at home packing up.”

She worked in day care and for Planned Parenthood (“It’s not what everybody thought it was; it was preventive, running programs against being sexually promiscuous, how to say ‘no,’ how to be a good parent,” she says) when she was approached to apply for the director’s job at the Boys & Girls Club, which was set to open in the cafeteria at M.C. Riley Elementary School.

“I truly had no idea what the Boys & Girls Club was when I interviewed for the job,” Hornbeak, better known as “Miss Molly,” recalls with a laugh.

She quickly learned that the Boys & Girls Clubs of America were created “To enable all young people, especially those who need us most, to reach their full potential as productive, caring, responsible citizens.”

Raised by a military father, Hornbeak understood the value of careful scouting before moving into action. 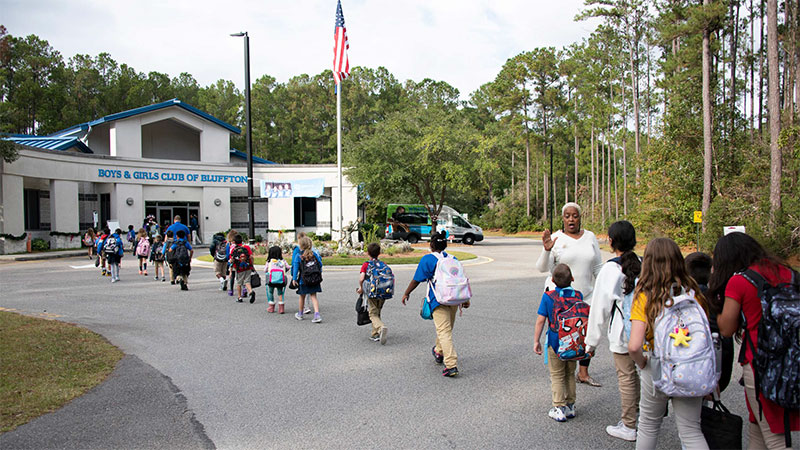 “I spent a couple of days to observe and see what I’d gotten myself into. Then I went home and cried for a couple more days,” she says. “I’d never seen anything like it.”

The 200 kids in the fledgling program came from broken homes and other challenging life circumstances. Hornbeak witnessed fighting, cursing and threatening behavior.

But after her initial shock, she recognized that she was in a position to establish high expectations from the start.

“I had the power to suspend the kids. Boys & Girls Club is a privilege that offers lots of hope and opportunity. They needed to respect that,” she says.

Her decision to promptly suspend 28 students sent shock waves throughout the community. With membership costing a mere $45 a year — by far the lowest cost afterschool care option available to working parents — the miscreants’ parents got the message and passed it along to their kids: What “Miss Molly” says, goes, period. No messing around.

And that swift dose of tough love planted the seed for nearly a quarter century of success. In its 24 years, the club has served more than 5,000 kids, built a new, stand-alone building (at H.E. McCracken Circle) and implemented special programs, including summer camp participation and the Keystone Club, through which teen members raise money for a group trip.

“It’s pretty amazing the impact that caring adults can make in these children’s lives, the consistency of seeing the same person leading and guiding them. It literally takes a village to raise a child,” Hornbeak says. “It’s our job to figure out how to encourage and inspire them.”

She is especially gratified when alumni return to visit or support the club with donations.

“Some of the really, really challenging ones come walking back into the club today, bringing me their own children!” she says.

Hornbeak is effusive in her praise for the club’s volunteers: “If not for them right there on the battlefield with us fighting for these babies, we couldn’t do it.”

Asked if she’s eyeing retirement any time soon, Hornbeak, 68 — she cheerily suggests a reporter revise a query to, “How young are you, Miss Molly?” — says she’s right where she belongs.

“I’m of the mind that this is something I’m supposed to do, according to my God and my belief. I am as excited today about this organization as when it was first started,” she said. “As long as I feel like good things are happening here, I don’t need to be thinking about retirement.”