FILMMAKER TIM GRAY DOCUMENTS PERSONAL STORIES OF WORLD WAR II When Tim Gray, a filmmaker with 31 documentaries to his credit, needs a quiet environment where he can concentrate on writing his next documentary, he heads to Hilton Head Island.

A resident of Rhode Island, Gray’s condominium near the Coligny area serves as his refuge the half dozen or so times a year that he and his wife visit the Lowcountry.

“Since we started to come down to Hilton Head a lot, I’ve found it the perfect place to write these films,” Gray said. “With the last three films — one that Tom Brokaw narrated, one that actress Jane Lynch narrated and one that Gary Sinise narrated — I spent a lot of time in Hilton Head writing them. I find it a very calming place to write. In a short time, we’ve become very connected to the community there. It’s become a very special place to us.” 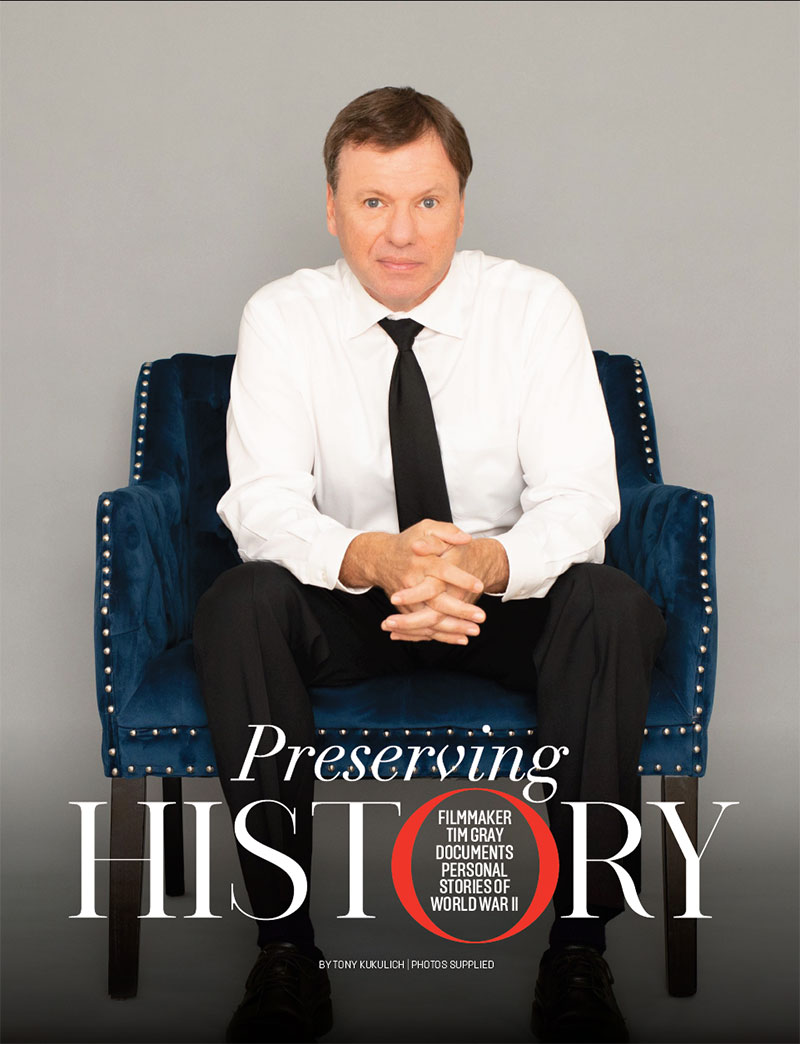 After working for 15 years as a TV sportscaster, Gray left television sports behind to follow a passion that he had for World War II history. In 2006, he raised $40,000 and took five D-Day veterans back to Omaha Beach.

The veterans spoke about their experiences on that beach as the Allied invasion of Nazi-occupied France got underway in June 1944. Gray used the experience as the basis for his first documentary, and it generated enough interest to do a second. As his films garnered more attention, celebrities like Dan Aykroyd, Matthew Broderick and Luke Bryan began to offer their services as narrators.

Working in cooperation with the nonprofit World War II Foundation, Gray’s films are frequently seen on American Public Television and PBS. Nationally they rank in the top five requested programs on PBS. 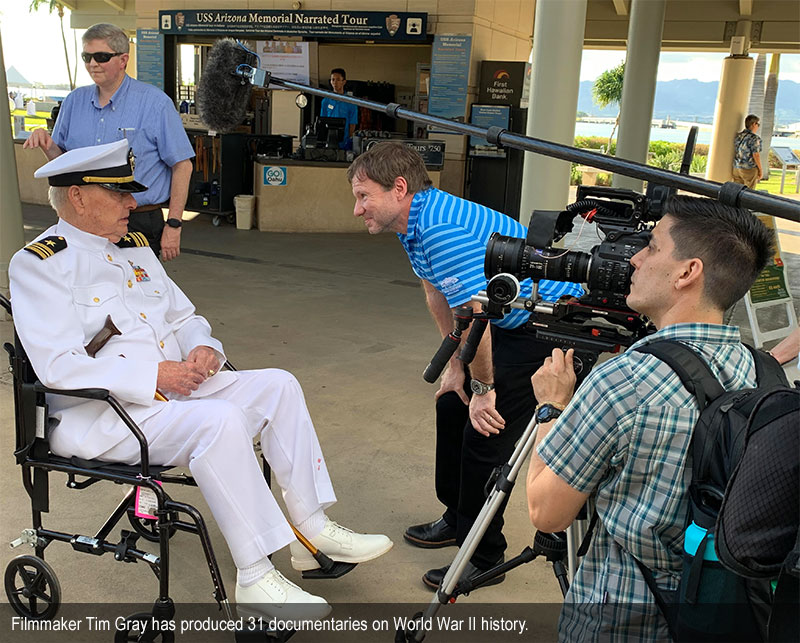 In addition to his completed documentaries, Gray has another 10 in production with release dates scheduled through 2026. Though his budgets have expanded up to $350,000, Gray said it’s still only about half of what a commercially produced documentary might spend.

“We operate really, really lean,” Gray said. “We want the money to go back to the foundation.”

Gray’s interest in World War II did not develop suddenly. It’s been a lifelong obsession that started at the age of 6. From the beginning, Gray said his interest has been in the personal stories of those involved in the great conflict. He’s remained true to that perspective, and it is reflected in his extensive library of work.

“They deal with the personal stories of World War II rather than the 30,000-foot view,” Gray said. “It’s about taking veterans back to where they fought, whether that be a small island in the Pacific or in Europe or surviving in concentration camps.”

When Gray developed his approach to documentary making, he didn’t take an easy path. Getting a film crew to Paris or Belgium is expensive, but not necessarily difficult. Getting a crew and aging veterans to a tiny speck of coral in the middle of the Pacific Ocean is another matter altogether. Also, working in Paris rarely requires crossing crocodile-infested rivers, Gray noted.

“It really is interesting to go to these small islands in the Pacific and there’s still tanks and crashed planes, and you go into caves where there are radios and guns,” he said. “It’s like the war just ended. These are places that it’s not easy to get to. The remnants of war are all over the Pacific, more so than in Europe. You’ve got to be careful where you walk.”

Working in remote locations like Guadalcanal or Peleliu requires a lot of planning, and close coordination with local guides. Despite the many logistical challenges, Gray has found the work deeply satisfying.

“Going to these places with veterans has been the most worthwhile thing I’ve ever done in my professional life,” Gray said.

American involvement in World War II got underway nearly 81 years ago. Over the course of the war, some 16 million men and women served in some capacity. Gray said that about 230,000 veterans of the war are still living, though that number is getting smaller every day. There will be a time in the not-too-distant future when there are no living World War II veterans alive. 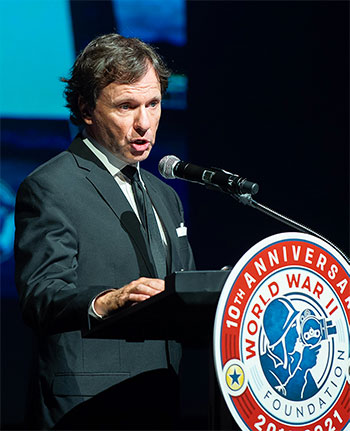 Not wanting to lose their stories, Gray began an effort more than 15 years ago to collect every story he could.

“In 2006 we started to collect as many sit-down interviews with these veterans as we could,” he said. “Sometimes we’d interview 50 veterans in one day. We’ve been collecting these interviews since 2006, and I’d say

that 80% of them haven’t seen the light of day yet. In the meantime, many of those veterans have passed away.”

Gray founded the World War II Foundation to help educate younger generations about World War II. Through the foundation, his documentaries are donated to PBS and made available to educators and the general public at no cost. They have also found an audience outside of the United States in countries like China, the Philippines, France, the United Kingdom, Italy and Australia.

The work of the foundation has attracted support from a wide variety of sources.

“Preserving the history of World War II is important to me personally,” Aykroyd said. “I support the mission of the World War II Foundation and its efforts to chronicle the stories of WWII veterans, who are passing on at the rate of 400 per day.”

Generating interest in the war for high school-aged students means presenting the information in a way that appeals to them. To that end, he added a virtual reality camera crew to his production team.

“What we’ve started to do is bring a separate film crew with us to shoot virtual reality films in Pearl Harbor and in Normandy at Omaha Beach,” Gray explained. “It’s a way to educate the younger generation who are very visual. When you put the goggles on, it gives you the feeling of standing on Omaha Beach, touching the bunkers, touching the sand. While that’s going on, you’re hearing the veterans talk about what it was like to be there. It’s a sensory experience; introducing history to this younger generation through a sensory experience.”

Gray said he’s looking forward to his next stay on Hilton Head Island.

“It’s our sanctuary,” he said. “The people are so nice. We’re enthralled with the area, but the people have been over-the-top nice.”