BLUFFTON’S JAMM WISE HAS ‘INDESCRIBABLE’ PASSION FOR THE FLORIDA GATORS

Jamm Wise is a friendly guy. So, when religious solicitors knocked on his door a few years back, Wise invited them into his Bluffton home.

One of the men looked down to see a University of Florida doormat and knew he’d stepped into a swamp. Gator gear and memorabilia — helmets, blankets, wall hangings, toys and more — were everywhere.

“You might not want to hear this…” the man started to say, and Wise suddenly knew he had an enemy in his midst: a fan of Florida’s archrival, the University of Georgia Bulldogs. 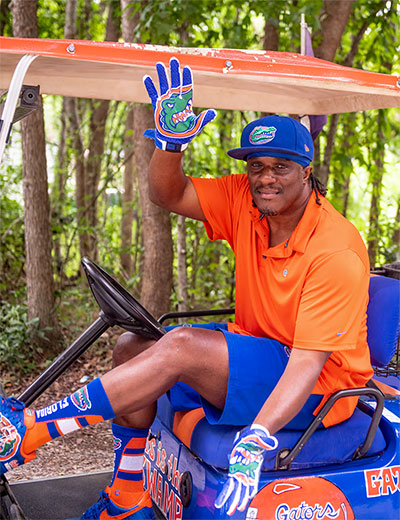 He is a friendly guy, so he sent that proselytizing ‘Dawg’ packing with as much good humor as he could muster (and let the other guy stay), but he was dead serious: The only Georgia fan allowed in his house is his son’s “old lady,” and even then, Wise says, “I don’t want her here.”

The Bluffton native can’t help himself when it comes to his beloved Gators. He considers himself the biggest Florida fan on the planet.

“Look, I am a Gator,” he declares, showing off room after room of ultra-cool, orange-and-blue Gator gear and memorabilia. “The passion I have for them is really indescribable. I can’t explain how much a fan I am.”

He also can’t quite explain how a South Carolina resident became Gator Fan No. 1; call it instinct. It began when he was a boy, watching Southeast Conference football games. His devotion accelerated in 1990, when he was a student at Hilton Head Island High School.

That’s when former Gator and NFL quarterback Steve Spurrier took the head coaching reins at his alma mater and turned around a program that hadn’t been a real contender for years.

The coach’s confidence was not misplaced: The Gators went on to win six SEC championships and beat their other archrival, Florida State, to take the first of their three national championships on Spurrier’s watch.

Wise became all Gator, all the time. He has attended every home football game at “The Swamp” in Gainesville, as well as several away games, for decades. When he can’t attend an away game, he watches at home — alone.

“Nobody is allowed at my house. People would be trying to talk to me, and I can’t have that,” he says.

Thirteen years ago, Wise even turned his golf cart into a blue-and-orange Gator-mobile, complete with a mean-looking reptile chomping on FSU Seminole and UGA Bulldog logos. During the COVID-19 pandemic, he had his photograph taken so he could “attend” home games in his usual seat.

But Wise’s Gator love goes well beyond football. He’s a booster for the whole university, touting all its men’s and women’s teams as well its reputation as a top public university.

“We are one of only four schools with a (national) championship in baseball, football and (men’s) basketball,” he says proudly. “We are known as the ‘everything school’ because we’re good in every sport.”

Living his Gator pride daily, at work (he’s a truck driver at the Port of Savannah) and at home, Wise likes to think he’s made it easier for others to show their pride, whatever their allegiances.

“It may seem a little crazy, but I do believe I had a little to do with the change in culture around (Bluffton) displaying fandom for your college program,” he says.

While his beloved Gators have not yet managed to make college football’s four-team national-championship playoff, Wise says it’s only a matter of time.

“And when we get there, it’s going to be my turn,” he says with Spurrier-like confidence. “Then all those Bulldogs I work with every day, they’re going to have to shut down their Facebook accounts and listen to me!”

In the meantime, he’s OK waiting — well, as long as Florida beats Georgia, as it has in 22 of the last 32 years.

“The Florida-Mutts (Georgia) game is the one game that means the most to me. It makes or breaks my season,” he says. 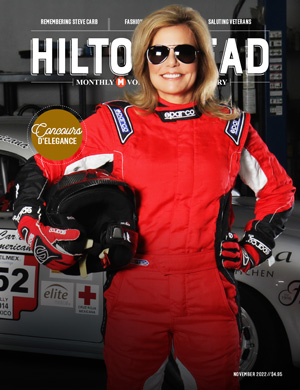