The war in Ukraine seemed closer to home last month when 20-year-old Illia Ovcharenko, a native of Chernihiv, in northern Ukraine and only 110 miles from the Russian border, arrived for the 2022 Hilton Head International Piano Competition.

His host family, Van and Lauren Schwiebert of Hilton Head Plantation, wanted to welcome and support him. Apparently, their neighbors did too.

“I sent an email out to the Deerfield crowd (their neighborhood),” says Lauren, explaining when and why he was coming.

Afterward a few blue and yellow ribbons appeared. But during the hour when they left to pick Ovcharenko up from the airport, something amazing happened.

Upon returning home, Lauren says, “Every tree, mailbox, and lamp post was covered. There were gold placards on the side of the road, welcome hearts, sunflowers, and banners of support. He was so touched by the outpouring that he wept in gratitude.” 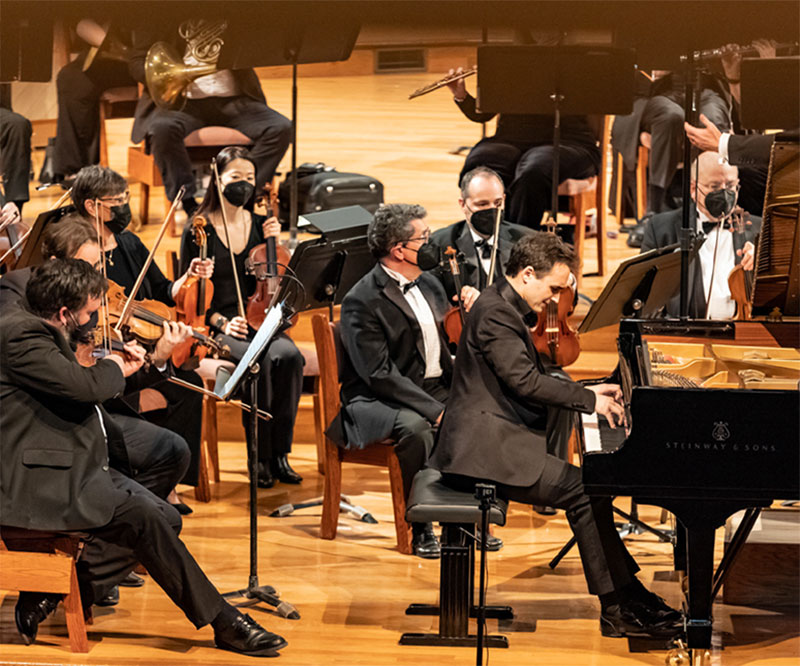 Ovcharenko, who is pursuing a bachelor’s degree at the Buchmann-Mehta School of Music in Tel Aviv, Israel, and who travels frequently to play with prestigious orchestras like the Jerusalem Symphony Orchestra and the Versailles Conservatory String Orchestra, last saw his parents in the fall. He learned of the invasion from his mother.

“I was in my dorm when she called me at 5 a.m.,” he recalls. “She said, ‘Can you imagine, he really started it? What a crazy guy.’” He pauses, then grins, “Of course, she used much worse words!”

Turning serious, he adds, “It was so scary. I couldn’t eat or sleep during those first days.”

Although phone calls with his parents once seemed obligatory, he now cherishes every conversation, even exclaiming, “An hour! We talked for an hour. I never thought that I would be that thrilled to speak on the video with all of my family.” 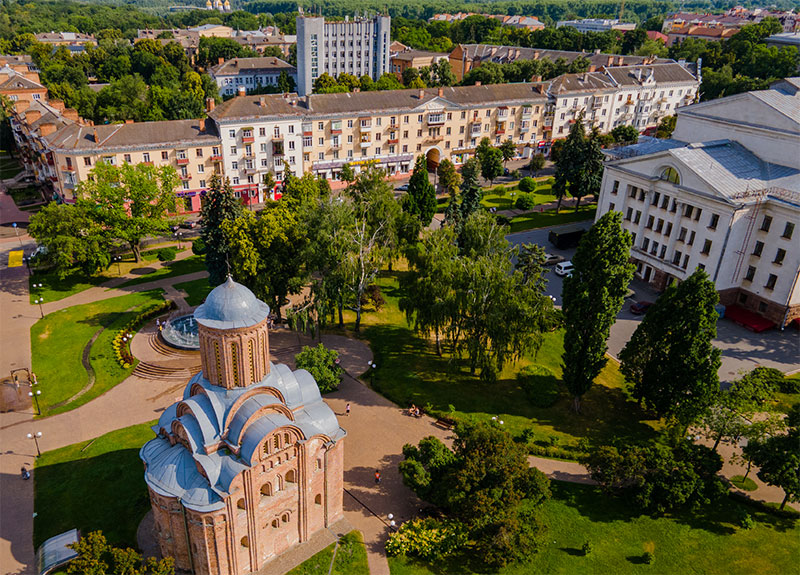 After his arrival on March 5, Ovcharenko knew he had to focus on the competition. This year’s 20 participants came from a competitive field of 165 video applicants. The rigorous week of elimination rounds would require poise, perfection, and “something extra” if he wanted to make the finals.

Although most days were filled with rehearsals, his host family urged him to have some fun too.

“We took him to Hudson’s to give him the Lowcountry dining experience,” chuckles Van, “but it was freezing.”

A bike ride on the beach with a fellow musician and a family boat cruise lifted his spirits.

Thoughts of war, though, were never far away, especially when Ovcharenko lost contact with his family for three days. He credits the community for inspiring him to keep going.

“The people all around me here, they are just so supportive. Everyone. It’s indescribable,” he says. “They gave me such hope and such a proudness. I wasn’t nervous at all. I knew there were people sitting in the hall who were praying for me, praying for my family, and with each day it became easier.”

Ovcharenko rode that wave of support, brilliantly playing a variety of sonatas and steadily advancing to the trio of finalists.

“I tried to put something new into my music,” he says about funneling his uncertainty into something positive. “It helped me because music is about feelings – and sometimes not the best feelings.”

That long-awaited phone call from family came just before the final competition.

Although everyone was safe, he learned that his parents’ and grandmother’s house was destroyed in a bombing. With communication systems down and no available electricity, water or gas, the family fled to another area of Ukraine where they found shelter with one of Ovcharenko’s former piano teachers. He also learned that his older brother and his wife are expecting a child.

Speaking wistfully about the city where he grew up, Ovcharenko finds it “crazy” to imagine all the beautiful places he loved and the streets he walked on every day are now in rubble.

“Even the music school where I started,” he sighs.

Ovcharenko, who started playing piano at age 7, never imagined he’d become a professional, but his teacher saw something special in him. His father, an athletic coach, hoped he’d pursue basketball or gymnastics.

“Now,” Ovcharenko jokes, “my father insists that playing piano was his idea.”

Neither ever imagined they’d be separated by war. Yet, both remain optimistic and proud of their country.

“They are fighting so strong and that gives us real hope,” he says, adding that the conflict has united his people. “We love Ukraine and are proud to be Ukrainian. We will give everything to be free.”

That pride was evident during his final performance as he played Tchaikovsky’s Concerto No. 1 in B-flat minor. Accompanied by the Hilton Head Symphony Orchestra, Ovcharenko hit every note with confidence, earning a standing ovation at the end of the first and third movements.

He chose the difficult piece because he’s been working on it since he turned 15, when his teacher felt it was too difficult for him.

“I feel connected to this concerto because of that,” he explains, “and because the third movement, which is a Ukrainian folk song, brings me emotions to play. I feel like this is something that’s mine, something that’s ours.”

Ovcharenko graciously received second-place honors for his efforts and credits those around him for his success.

“They were incredible,” he says of the Schwieberts, adding that he has “the deepest gratitude possible to everyone. Even to those I didn’t meet.”

“Some of them sent me envelopes of how they feel about my family, about my playing,” he adds. “I will never forget my days on Hilton Head – they were truly unforgettable.”

Despite just learning of a favorite neighbor’s death in a bomb blast, he optimistically vows, “I will come back and see more of the island.”

“Bring your family and girlfriend,” the Schwieberts urge.

It’s a promise everyone hopes he can keep.