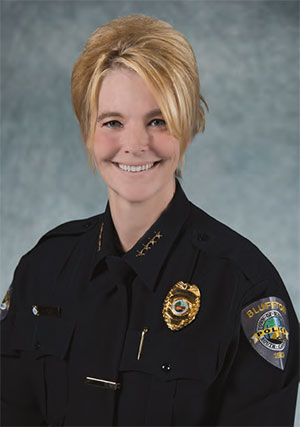 As cities and towns around the country grapple with tenuous relationships between communities and police, Bluffton has hired a police chief who places positive community relations at the top of her agenda.

Bluffton is a special place where the police department and the community are integrated, Chief Stephenie Price said. And even though she is the department’s third permanent chief of police since Joey Reynolds retired in 2017, morale is high, Price said.

“Much higher than any that I’ve been in, and that is no small statement,” she said. “They not only love to interact with their community, they thrive on it. And I feel that same way too.”

And that interaction is not directed to one segment of the population because “we police to our community,” Price said. No matter their race, origin or sexual orientation, everyone deserves respect when they interact with Bluffton officers, she said.

Price, 48, is the former assistant chief of police in Savannah. In announcing her appointment to the $120,000-a-year job, Town Manager Marc Orlando said she had “the conviction and compassion needed to serve as Bluffton’s chief of police.”

Price became a police officer in 1999, but she did not have a direct path to law enforcement. She worked in cosmetology, as an emergency medical technician, a paramedic, and became a licensed practical nurse.

Her husband, Chris, is a sergeant with the Kansas City Police Department.

The couple has had a commuter marriage since Price moved to Savannah.

“He has commuted back and forth,” she said. “Home to us is where our family is. This is his home. And he comes home as often as he can.”

Her first weeks in Bluffton were spent meeting with the community and learning the department’s culture, and reviewing practices, procedures and policies, she said. There are currently 52 officers and another five unfilled positions. The department has 12 officers of color, including two females. In total, there are nine female officers.

Recruiting and retention is a department focus because if there are not enough officers on the streets, it causes more stress, she said. Traffic is one issue generating a lot of conversation, and the department is going to launch a campaign on distracted driving, she said.

“There are a lot of accidents and incidents with distracted driving and speeding,” she said. “That just leads to a myriad of things.”

One of her top goals as chief is to develop a wellness program for her officers.

“I’m pleased to say that on their own, there are pockets within the department that are addressing these issues,” she said. “But to me, mental wellness is as important as, or even more important than, physical health. They go hand-in-hand.”

Price said she decided early in her career that she wanted to be a police chief. In Kansas City, she served in a variety of roles, including detective, sergeant and captain in several divisions. She left Kansas City for the Savannah job.

“I spent many, many assignments, getting the information I needed and getting the experience I needed to be a police chief one day,” she said. “I left assignments that I loved because I knew I would need a wide variety of experiences to be a chief.”

When her officers asked how long she would stick around Bluffton, she told them that her plan was for her two teenagers to go to school here and that she and her husband had bought property to build a house.

“My message to them was this,” she said with her ever-present smile. “I am going to stay as long as I am respected and senior leadership wants me to stay.”