Few New Yorkers have the audacity to host 184 people in a studio apartment. But Chris Schembra did so every week for a year, donning an apron and a smile while putting guests to work before sharing in the centerpiece of the night: a simple bowl of pasta.

I am lucky to count myself as one of over 800 people Schembra brought together that year for what became known informally as the 7:47 Club — for the time the pasta is dropped in the pot. The networking events soon became Schembra’s full-time pursuit as the waitlist grew and he flexed his chops as a former theater producer, expanding his dinner model for business owners and their clients across the country.

Four years and over 300 dinners later, Schembra, a Hilton Head Island native, has captured his experiences in his first book, “Gratitude and Pasta,” to be released this month. 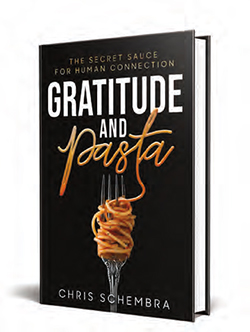 It’s already been featured in Forbes’ “8 Books That Will Help You Spark Human Connection in 2020” list for the way it details Schembra’s struggle to find meaning in his life and how he formed relationships through the remarkable power of a bowl of pasta.

Four years and over 300 dinners later, Schembra, a Hilton Head Island native, has captured his experiences in his first book.

Part inspiration, part instruction, the book breaks down what seems like a daunting endeavor — hosting a gathering — into a structured, repeatable and enjoyable experience, easily managed by socially starved stay-at-home parents or entrepreneurs looking to expand their networks.

Of course, “Gratitude and Pasta” rarely mentions networking. But there’s still plenty of business potential in the dinners. The events cost guests nothing but a bottle of wine, which draws on the Ben Franklin Effect — a psychological phenomenon whereby asking someone a favor primes them for generosity. Then each guest is put to work in some fashion, whether setting the table, making amaretto, or pouring a glass of wine for a new acquaintance. This tangible work is a natural icebreaker, as introductions unfold organically. And, Schembra stresses, it’s surprisingly relaxing for high-stress leaders and managers to be told what to do.

With little cost to the host besides the space, the ingredients, and their time, hosting one of Schembra’s dinners is a worthy investment.

While the immediate benefits of playing host may not be evident with just one dinner, the compounding effects of genuine connection will bear fruit in the long term — and in the short-term, well, if you’re not having a good time, you’re probably doing it wrong.

What’s more valuable than connecting with all your guests individually? Becoming the lynchpin that connects others. If you’re responsible for connecting two people, not only are you then connected to both of them, their new connection will remind them of you. Coined as a buzzword in recent years, “superconnectors”’ will see their networks expand tenfold.

When life gets back to normal and we no longer find ourselves having to practice social distancing, “Gratitude and Pasta” is sure to empower readers to structure and enhance their own dinners into memorable experiences for their guests. Whether you’re a budding entrepreneur, run a professional services business, or are an empty nester craving more human connection, this book is for you. Speaking of gratitude, it would make a lovely gift, too.

For more information, go to gratitudeandpasta.com.