It came as a shock to Janet Porter’s sorority sisters at Ohio State University when she took an interest in end-of-life issues and enrolled in studies on death and dying at St. Thomas More Newman Center, the school’s Roman Catholic campus ministry.

For her, it was just the beginning.

Porter earned her bachelor’s degree in health management and a master’s in health administration in health management policy, and then earned an MBA in strategy and a Ph.D. in health care strategy. And she’s put those degrees to work: For more than 40 years, she’s served as a public health leader, a hospital executive and an administrator, author, lecturer and faculty member at institutions including the Dana-Farber Cancer Institute, Nationwide Children’s Hospital, University of Miami, and University of North Carolina. Today, she serves on the board of trustees at OSU and Stroudwater Associates. 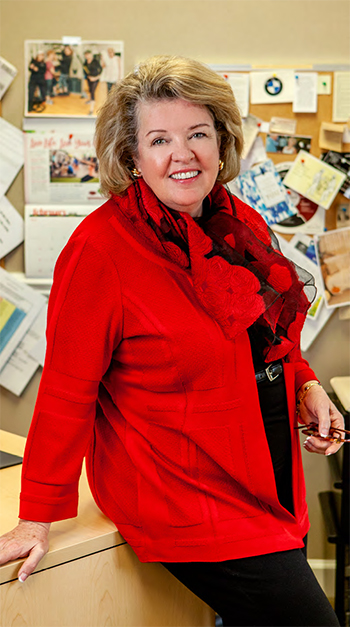 And she will be a featured speaker at TEDxHiltonHead’s “Making Waves” presentation, giving a talk titled “Living Life Fully Through the End of Life,” discussing lessons she’s learned through her work, including as chairwoman of Hospice Care of the Lowcountry.

The group “helps its valued patients and their families experience the fullness and dignity they deserve, even as they face the anxieties with the end of life,” she said.

We know death is coming, but we don’t want to talk about that...

“We recently did a ceremony for a veteran; it was the couple’s 60th wedding anniversary,” she said. “We got a cake, and these guys are in uniform. After the ceremony was over, the patient turned to our volunteer coordinator, Maggie Clark, and said, ‘I know there were only six people here, but it felt like 600.’”

The patient died a week later, and Porter said she was glad the hospice group was able to help him mark his anniversary with a special ceremony. “If we don’t talk about” end-of-life issues, she said, “we can’t honor the wishes of the ones we love.”

Honor and dignity are very important to Porter.

“Mother Teresa, Florence Nightingale, Clara Barton, who founded the Red Cross — those were who I really wanted to be like,” she said. “Then I had this service thing from my parents. My parents would say that they wanted to give us three messages — get a good education, work hard and provide service to others.”

Part of her service to others, Porter said, is encouraging them to have the “someday” conversation about end-of-life issues with loved ones before illness — including dementia — complicates the process.

“It’s a taboo subject like sex, finance and religion — and politics, now,” she said.

But even if it’s an awkward conversation, it’s a necessary one. To make it easier, she recommends resources like “Driving Miss Norma” by Tim Bauerschmidt and Ramie Liddle, a book that focuses on what really matters at the end of life.

“Everybody should read this book,” Porter said. “We know death is coming, but we don’t want to talk about that and we don’t prepare for it and then that end- of-life experience is not what you want. My message is the gift you give those you love is to tell them what’s important to you at end of life. The medical profession has medicalized the dying process — do you want a feeding tube or do you want to be on a ventilator? The legal profession has legalized it — so they say where do you want your assets to go? In fact, it’s a social process of you and your family bringing closure and celebrating your life.”

Janet Porter, chairwoman of the board of directors of Hospice Care of the Lowcountry, will be a featured speaker at TEDxHiltonHead’s “Making Waves” presentation, to be held from 9 a.m. to 2:30 p.m. March 14 at the Arts Center of Coastal Carolina. Tickets are $72 and include morning refreshments and lunch. For more information, go to www.tedxhiltonhead.com.