NATIVE ISLANDER HONORS TIES TO THE PAST BY MAINTAINING TINY CEMETERY

Finding time to tend to Braddock’s Point Cemetery is a no-brainer for Richard “Skeet” Williams. The grandmother who raised him, Ella Williams, lies there, as do other relatives.

“It is all about family,” he said during a tour of the tiny cemetery. “Everybody here is family. Somebody has got to keep things going because we are family.”

Braddock’s Point sits on a small plot of land on Lighthouse Lane in Sea Pines on Hilton Head Island. It is within a golf shot of the 18th fairway at Harbour Town Golf Links, but isn’t visible from the course because of a condo complex. 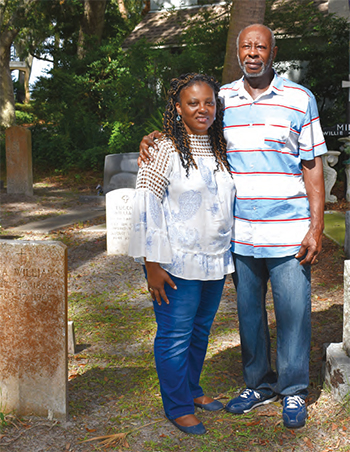 The cemetery was originally built in the 1800s for people enslaved on a plantation owned by the Bennett family and probably was larger, said Gullah historian and native islander Emory Campbell. Many of the slaves’ descendants stayed in the area until the 1940s, when they moved to other parts of the Lowcountry, he said, and though the cemetery was still in use, it fell into disrepair. There was no fence marking the site, so Sea Pine developers built around the marked graves, Campbell said.

“Those that weren’t visible probably got buried (under the golf course and the condominiums),” he said.

The smaller cemetery remained a place of burial for descendants of the Williams and Chisolm families, but looked abandoned to people walking passed it. Names on some of the older handmade gravestones became indecipherable, other markers disappeared.

“Sometimes people would come in here and not respect it as a burial ground,” said Williams’ wife, Vanessa.

Things began to change in 2009, after part-time Hilton Head resident and history buff Wendell Grayson Sr. visited the graveyard. Grayson said he took on the project of revitalizing the disheveled cemetery and reached out to Campbell and other Native Islanders when the company excavating headstones wanted a waiver for any damage that might occur. The connection led to his partnership with Williams, who began helping to restore the family burial site. Williams’ knowledge of family history filled in the narratives of those buried at Braddock’s Point and allowed Grayson to map out individual graves.

That map and biographies of those buried in the cemetery are included in a book Grayson wrote about Braddock’s Point. Both he and Campbell praised Williams for his commitment to the cemetery and the need to memorialize family buried there.

“Skeet is the primary caretaker,” Grayson said. “He does the cutting and weeding. He is very particular, as I am.”

Today, there is a fence around the 49 graves in Braddock’s Point — including two new burials added in 2016. There is room for another 15 to 20 graves, said Williams, whose work in preserving and maintaining the cemetery earned him an Honored Islander Award in 2018.

“We had a few headstones where the palm trees were growing underneath and lifting them up,” Williams said. “We just about reset all of these headstones in here. Some were leaning, some were way down in the ground. We lifted them up.”

The cemetery restoration has helped preserve traditions brought to America by Williams’ forebearers. For example, one grave marker still has a plate set into it. Indentations on other gravestones hint at missing plates.

And now that the cemetery has been restored, people who live in the area will pick up branches they see lying inside the fence, Williams said.

“Mr. Grayson asks friends to check it out,” said Vanessa Williams. “Sometimes he will send my husband an email and say some friends stopped by and there is some work that needs to be done. They’ve become personal friends.”

Anyone or any organization may nominate individuals for the awards.