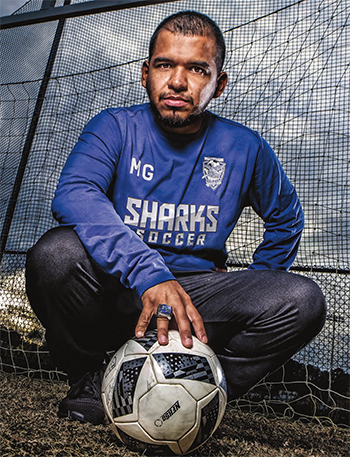 Looking back, Misael Garzón should have been excited about immigrating to the United States during one of the most economically prosperous times in recent history, but he was 6.

He was excited about going to Disney World.

Even though he hasn’t made it to the Magic Kingdom, Garzón sometimes still feels he is living a fairy tale — like when he coached May River High School’s boys soccer team to the Class 3A state championship last spring.

Baseball is king in Venezuela, where Garzón was born and lived until coming to the U.S. But his father’s family is from Colombia — where soccer is king — and he fell hard for “futbol.”

There was more opportunity here. Better chances for us.

Even at an early age, Garzón began marking the years in World Cups. That’s why he remembers it was the fall of 1994 — right after the U.S. hosted the World Cup — when his family made the journey to America. His father was a minister and had an opportunity to work in Texas.

“There was never a plan to go back home,” Garzón said. “This was America in the mid-’90s, one of the most prosperous times in American history. So there was more opportunity here. Better chances here for us.”

But it didn’t always feel that way. That first winter in Texas was brutal, and the Garzóns felt isolated. They knew no one, had no family in Texas, barely spoke the language, and felt disconnected from the culture.

Then they moved to Savannah. Garzón felt more comfortable in a place with more diversity, and he made friends and flourished.

Then, another move. This time to Hardeeville, where Garzón was a freshman at Jasper County High School, a struggling school in the infamous “Corridor of Shame,” operating in a rundown building with a dearth of textbooks. And, as Garzón discovered, a clear divide between students of different races. Garzón did his best to end the social segregation.

“I was one of the first people to say, ‘I’m just gonna sit here with these people. I don’t see the issue. I don’t understand what you guys got going on here’” he said.

In spite of the subpar conditions at Jasper County High in the early-2000s, Garzón excelled in school. He was determined to buck the stereotypes and chose to attend South Carolina State University on academic and band scholarships.

His father had a green card, the rest of the family was applying for permanent residency at the time, and Garzón was loving life at SCSU.

Then they got the letter.

The office in charge of the Garzóns’ petition for permanent residency couldn’t find their paperwork. Not only were they not being granted permanent resident status, but Garzón was in danger of being deported. He was threatened with a return to Venezuela — a country he hadn’t seen since he was 6 years old — and he was no longer eligible for his scholarships.

“When I got that letter and read that I couldn’t go back to school,” Garzón said, “it completely destroyed me.”

He sunk into a deep depression. Any hope of returning to college faded when he found out his girlfriend was pregnant. He worked wherever he could find it—gas stations and furniture stores. His daughter was born. He and his daughter’s mother split. He contemplated suicide.

He was not living the American dream.

Until he met Danielle, who became his wife and changed his life. She encouraged him to pursue his dream of becoming a soccer coach, so he took a volunteer assistant position at Jasper County High School.

The next season, Beaufort High School needed a junior varsity coach. Garzón was sure he wasn’t qualified, but Danielle made him apply. Coach Terry Rawlins asked him to come in for an interview and hired him on the spot.

Rawlins became Garzón’s mentor, and he was so loyal to the coach who took a chance on him that he hesitated before responding when he was offered the head coaching position at May River High School three years later.

At May River, Garzón planned to build the Sharks into a competitive, respected program within five years. His team won a state title in three.

In addition to his work at the high school, Garzón is well known by legions of Lowcountry boys and their families who praise his energy and passion for developing young players. He coached for club soccer academy Global Premier Soccer for several years and is now with the Savannah-based club Tormenta.

Some 25 years after coming to the United States as a boy, 13 years after he feared he might have to leave, and nearly two years after he finally became a naturalized citizen, Garzón has a successful career, a happy marriage and three beautiful children.