Webb Simpson is back to defend his championship at the 53rd RBC Heritage Presented by Boeing. The April 12-18 tournament is at Harbour Town Golf Links on Hilton Head Island.

Simpson, a Team RBC Ambassador, surged through a tightly packed leaderboard last June to win the Heritage. He finished 22-under-par 262 to beat a group that included Daniel Berger, Sergio Garcia and Brooks Koepka. The winning score was a record, beating Brian Gay’s 20-under 264 finish in 2009.

“I’ll never forget that walk up 18,” Simpson said during RBC Heritage Presented by Boeing virtual media day. “It was an honor to win there.”

Simpson said last year’s win was extra special because of the coronavirus pandemic. He stayed sharp by practicing before the tournament and was ready to perform at a high level. He said the win offered something positive during trying times for his friends and family. 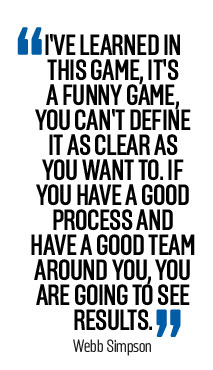 His other PGA Tour victories include the 2020 Waste Management Open, 2018 Players Championship and the 2012 U.S. Open. In his 10 previous starts at Harbour Town, he carded six top-20 finishes, including a second-place finish in 2013.

Simpson, who in mid-March was ranked No. 9 in the World Golf Rankings, said he’s excited to compete in front of a limited number of fans.

“We have missed the fans,” he said. “There is excitement from the fans. I love it.”

Hilton Head Island offers a great distraction away from golf, Simpson said, noting the bike rides, beach and restaurants. The relaxation allows him to compete at his best.

“Anything we can do to get our minds off of golf, off of competing, off of preparing is a good thing,” Simpson said. “It feels like a work week half the time and the other half feels like a vacation. I think that’s what’s led me to play pretty good there each year because I’m in a fresh mindset.”

Simpson said his ability to be one of the world's top golfers is a credit to the team that surrounds him, including his family, caddie and agent.

“I’ve learned I need to get away from results and get closer to my process,” he said. “I’ve learned in this game, it’s a funny game, you can’t define it as clear as you want to. If you have a good process and have a good team around you, you are going to see results.”

Simpson will be joined by South Carolina native Dustin Johnson.

Johnson, a Team RBC Ambassador, earned his second major championship at the 2020 Masters, where he won by five strokes and became the first player with a 72-hole score lower than 270.

He won the FedExCup for the first time in 2020.

Garcia and Berger are scheduled to compete.

Garcia won the Sanderson Farms Championship in October, where he birdied the 72nd hole to win by one stroke. It was his first win since the 2017 Masters. He finished last year’s RBC Heritage tied for fifth place and will be making his fifth start at Harbour Town.

Berger earned his fourth victory on the PGA Tour at the 2021 AT&T Pebble Beach Pro-Am. He won by two strokes over Maverick McNealy after sinking a 30-foot, 7-inch eagle putt on the 72nd hole. He was tied for third place at last year's RBC Heritage and will making his fourth start at Harbour Town.

For updates on the field, visit rbcheritage.com.