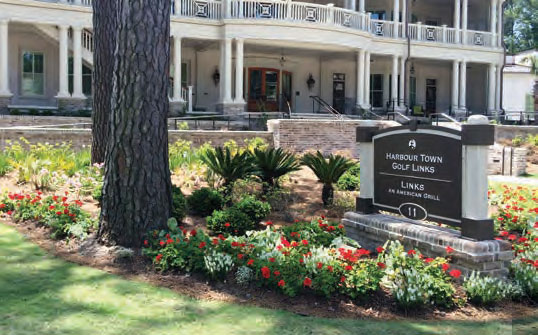 In 1969, the nation was introduced to Hilton Head as the media celebrated Arnold Palmer’s first big win in 14 months. The Harbour Town golf course, designed by Pete Dye and Jack Nichlaus, along with signature Charles Fraser elements like the then partially built Harbour Town Lighthouse set a standard for Hilton Head’s renown aesthetic, as well as what golf enthusiasts and happy Heritage partygoers alike would come to expect from this event, now attended by more than 100,000 people. “We try to make it better and better each year,” said Angela McSwain, marketing director for the Heritage Classic Foundation. “And a big part of that is the landscaping.”

For over a decade, The Greenery has maintained the Heritage’s landscaping — except for the turf on the golf course — and has formed a partnership that Steve Wilmot, tournament director for the Heritage Classic Foundation, said “gets stronger each and every tournament. There is no ‘I’ in team and The Greenery is a huge part of the success of the tournament each and every year.  As the foundation challenges us every year to ‘be better’ and to ‘do better,’ The Greenery also challenges itself to do the same. The eyes of the world are upon Hilton Head the week of the tournament, and the landscaping is so important to everyone’s overall experience.” 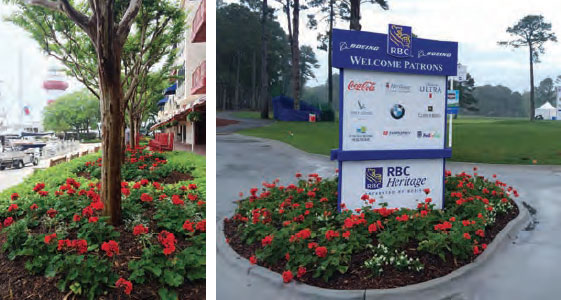 Jim van Dijk, The Greenery’s branch manager for Hilton Head commercial property, helps oversee the landscaping for the Heritage and said he and his team take great pride in capturing the spirit of the tournament. “From the moment someone enters the Sea Pines gate, we want them to feel part of the tournament and we want the Heritage’s aesthetic to pervade throughout — from the mobile ticket offices to the skyboxes to the course itself.”

Just like mastering the sport, van Dijk also said the success of the Heritage’s landscaping has come with dedication and practice. “It took three years of watching TV coverage and working to find the right color of geranium that balances with the TV screen,” van Dijk said. “The Greenery installs over 2,000 geraniums across the courses associated with the tournament — keeping 300 to 400 on hand in case of damage — and as many as 6,000 flowers for the Heritage itself.”

A great deal of planning also goes into the landscaping. “A year in advance, we begin brainstorming on ways we can improve and talking to our flower vendors. During the tournament, we make every effort not to disrupt the flow. We have a crew that goes out around 5 or 6 in the morning to check on the beds and make sure everything looks perfect,” van Dijk said. “We also follow players along the last shot of the day to do another clean up. We are excited about the work we do because the foundation does so much for our community and there’s no other tournament like this in the state. We appreciate being part of that and showing off our island.”