THE TRENDY OLD TOWN AREA IS GETTING A LITTLE BIGGER. HERE’S WHAT TO EXPECT.

Just a few months ago, the buzz among the employees at Downtown Deli was palpable. Some kind of big meeting was coming up. But no one knew what it involved, why the staff was being kept in the dark, and why they were going to the old Piggly Wiggly building, of all places.

There, huddled under exposed steel beams and insulation in the cavernous space that had recently been home to a thrift store, Downtown Deli owners Ryan and Leah McCarthy laid out their vision. The couple plans to turn the space into something much bigger and ambitious than their restaurant’s current square footage on Dr. Mellichamp Drive allowed.

A cooking school, a demonstration kitchen, and enough prep space to feed the company’s various ventures, from the deli and catering business to the food truck. It was all going to be right here. And it was going to be part of a massive revitalization to the entire area, one that would take Bluffton’s “New Old Town” and expand its boundaries beyond the Calhoun Street Promenade.

And it all started with a turkey reuben.

Developers Kim and Geoff Block were regulars at Downtown Deli, and as luck would have it they had purchased the old Piggly Wiggly on May River Road. They had a vision of their own, one that would take advantage of a slew of streetscaping projects being planned for the area, but first they needed a signature tenant to help generate excitement for the new place. The Blocks’ vision, the McCarthys’ vision, and the town of Bluffton’s vision for extended streetscaping were about to dovetail in the most serendipitous way. “Geoff is a customer of ours, and over a turkey rueben one day he just asked, ‘You ever think about moving?’ and we said, ‘All the time,’” said Leah McCarthy. “The pieces just fell in line.”

“Things happen for a reason, I believe in that. They had been looking for space for a while and this is perfect for them,” Block said.

Renovations will soon be underway at the building that most locals refer to as “The Old Pig,” even though Piggly Wiggly moved out nearly a decade ago. Dollar General will still remain at the site, joined by the new Downtown Deli and a third tenant to be named later.

Gone will be the exposed fluorescent lighting and corrugated steel, replaced by a refreshingly modern look that echoes the neo-Lowcountry style of the many new developments that have transformed Old Town Bluffton’s 1 square mile in recent years.

“(Town manager) Marc Orlando told me, ‘This is going to be the building we point to when people want to do retrofits up and down May River Road,’” said Block. “It is going to change this landscape for the positive. There will be a lot of Lowcountry elements in there. It will set the bar.”

The new strip, to be called May River Row, will offer golf cart parking as well as event space at Downtown Deli, both inside for weddings and receptions and outside for possible monthly food truck gatherings.

“We just want a space in Bluffton that could be part of the community,” said Leah McCarthy, adding that the new space could host anything from public events to yoga classes. 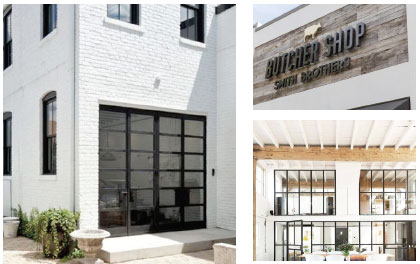 This new space not only offers something new in Old Town, it will help anchor a new gateway to Bluffton, thanks to extension of the May River streetscape project.

“It’s very symbiotic,” said Block. “We were very lucky they were doing this, and it helped us with the redevelopment plan, because we’ve incorporated a lot of what they’re doing to the building in terms of lighting, materials, etc. It will look like an extension, which is exciting for us and should be exciting for the town.”

The project, which will include on-street parking, new sidewalks and streetlights has already had a tremendous impact on Old Town, helping to revitalize and grow Bluffton’s original square mile.

“This is a quality-of-life project that enhances the Bluffton experience as it celebrates our uniqueness while showcasing May River Road as a restored centerpiece of Bluffton,” said Mayor Lisa Sulka in a press release.

And at the heart of it will be the “Old Pig,” which may finally shake off its anachronistic name as it gains a new lease on life as May River Row.

“Bringing good local businesses here and giving them an opportunity to expand their business, we’re excited about it,” Block said. “We’re happy to make the investment in Bluffton. We think it will be beneficial to the town, the tenants and the community.”